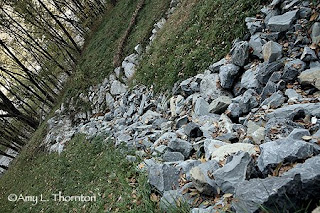 Rocky, cold and steep.  That’s the path of John Calvin that I came to know.  It is not a road I would have preferred and yet, in hindsight, I can see it was the best way to not only reach the meadows, but to savour the rich fragrance flowering there.  This trail was essential in my spiritual walk because it exposed my theological weaknesses;  I wasn’t as sure-footed as I thought.

In 1999 I discovered internet message boards and by 2001 had found a new niche:  a Christian theology discussion board called Philosophia Christi (PC).   This place offered christian fellowship and lively discussions on a variety of topics related to christian philosophy and theology.  It provided a much needed connection for me since I was now a full-time mom and missing adult connections.  And what was more, I could entertain dialogue about such things as paedobaptism, atonement, justification, free-will, spiritual gifts, predestination, eschatology, demon possession....the list goes on and on....that I had never found an opportunity for in real time, face to face.

PC had several hundred members from various denominational backgrounds, but chiefly from a Reformed point of view.  The regular members were extremely intelligent and well versed in Scripture and logic.  This became apparent as atheists would join us from time to time in order to hone their arguments.  I was entertained and inspired by the way our resident christians would wear them out in debate.  PC challenged me daily  to read and understand Scripture, to recognize logical flaws in arguments, to become a christian apologist in a sense.   Participating in these conversations and debates was an intense period and much to the frustration of my husband, consumed me at times.

These were the days that I devoured works by McDowell, Strobel, Kreft, Tacelli, Zacharias, Graham, Matthew Henry and several Strong’s reference books.  I started an apologetics notebook, kept index cards with favorite quotes and had many books opened with markers at all times....you would have thought I was working on a thesis to see my desktop under a plethora of notes and reference materials.

A storm began to brew when I learned the terms “Calvinism” and “Arminianism”  at PC.  There’s no need for all the details here, but suffice it to say that a line was being drawn between these two theologies and I was trying to figure out where I stood, in theory and in reality.  My footing, my American Baptist theology, was being scrutinized and my arguments against the attack were weak.  Within a few months of this, I began to see that if Calvinism provided the correct “lens” with which to view Holy Scripture, then my situation was dire:   ...maybe I wasn’t really saved.  Maybe I wasn’t a true christian.

I can still remember reading the Westminster Confession of Faith, especially article VI: I - VI  in tears.  This was the influence of St. Augustine on the Reformer, John Calvin and to me, the statements of how man was created in the image of God and his subsequent fall were not only dreadful, but incorrect.  Certainly God did not completely abandon mankind after the fall, leaving a “wholly defiled” creation.  If so, man would not have been blessed with the covering of shame.  God would not have clothed our first parents and Eve would have been unable to acknowledge God’s help in the birth of her son.

On the surface, this path grew my knowledge of church history and prompted a fresh look at Genesis.  Closer to heart, it cemented my disbelief in Calvinism and commitment to understanding the root of the Christian faith.  “Further up and further in” as Lewis wrote.  I would say, further back and further down.  Reach back to the beginning of the faith, dig down deep to discover the roots.  That’s where I’ll find what I’m looking for, where the roots are deeply nourished and unblemished.

I was relieved to reach the end of your post and see that you hadn't become a Calvinist! I tried to be a Calvinist for one day a few years ago, which is to say, I tried to live the day as if Calvinism were really true. I didn't make it through the day- I felt like God had abandoned me. Yet I know several Calvinists who are wonderful Christians. I don't understand how they are able to carry on.

I, too, have good friends (and family!) who are Calvinists of varying degrees; some are beautiful examples of what it means to be a Christian.

It's been my observation that the relationship between those who hold the strict 5 points is inversely proportional to the evidence of peace in their lives.