Our Thoughts Determine Our Lives 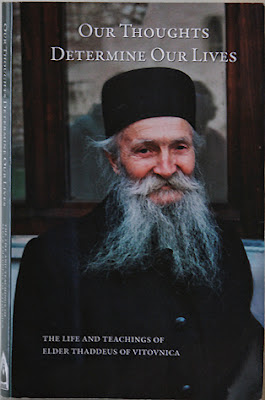 The Life and Teachings of Elder Thaddeus of Vitovnica:  A book review.
Soft-cover, 212 pages, including maps and black & white photos. Published by St. Herman of Alaska Brotherhood, 2011
I bought this gem from our friends at Holy Cross Monastery in Wayne, WV, the title catching my attention.   Are my thoughts really that powerful to determine the course of my life?  Surely some are more potent than others?  Who is Elder Thaddeus?
Hooked, I picked up the book to read the back cover and saw this quote:
“We must bear everything patiently and forgive all.  If we have good thoughts and desires, these thoughts will give us peace and joy in this life and even more so in eternity.  Then we will see that there is no death, that the Lord has vanquished death, and that He has given us eternal life.”  -Elder Thaddeus
I learned that Elder Thaddues was a very respected spiritual mentor and monastic, living in Serbia during the 20th century.   He lived during a time that brought many trials to his life, including imprisonment by the Nazi occupation of Serbia.  Being born in 1914, he witnessed two World Wars and the 1999 NATO bombings.  Remarkably, by the grace of God, Elder Thaddeus remained a pillar of peace, love & hope to his fellow countrymen.  Over the years, many people made a pilgrimage to speak with the Elder, seeking his wise counsel and prayers.
He passed onto heaven in 2002, but thankfully, his teachings on the spiritual life in Christ have been preserved in this book, compiled by the St. Herman of Alaska Brotherhood;  translated by Ana Smiljanic.
The book is divided into two parts: The Life of Elder Thaddeus and the lengthier second part, The Teachings of Elder Thaddeus.
I have discovered this work to be fascinating in it’s simplicity and profundity.  Isn’t it often true that when we discover a “new” concept, we often remark, “Of course!  Why didn’t I see it before?”  The prince of this world, however, is King of distraction and making our paths crooked.  Praise God, through the work and living witness of his saints, those paths are made straight.  Elder Thaddeus has given to me, through his teachings, a greater awareness and goal.  That goal is to master my thoughts and to realize how they affect my actions.

For example, in one account from his life, he was speaking with a woman who came to him in order to ask why her neighbor hated her so much and treated her badly.  She claimed she had done nothing wrong, but this neighbor was always giving her grief.  Elder Thaddeus then asked her, “Why are you always quarreling with your neighbor?”  And the woman replied that she had not so much as uttered a word to her evil neighbor.  But the Elder insisted that she was waging war with her neighbor because she was always thinking about her and anxious about her next move.  He instructed her to turn her thoughts to prayer for this neighbor and the issue would end in peace. (pg. 70)
Reading this account was a light-bulb moment for me.  How many times have I “waged war” with someone, including my loved ones (!) in my mind?  How much negative energy have I generated because of a perceived wrong?  Even more, how often do I  approach an issue with a negative mindset?   Why do I expect good results in resolving a conflict if I cannot even master my cynical thoughts about this person?
If you’ve read much on my blog, you’ll know that one of my many sins is having a quick temper;  a short fuse.  It’s a sin because it can cause me to act with haste which leads me to regret my words and actions.  I’m at a point in my life where I’m seeking peace, not just externally, but internally.  It’s a battle for me to keep the doors closed when anger wants to barge through... but at least I have a goal that keeps me moving in the right direction.
I know what I want.  I want to be a wellspring of peace and joy, most especially to my household.  I know that I enjoy being in the company of peaceful, wise souls.  By the grace of God, maybe He will help me to be that sort of person to others someday.   Elder Thaddeus said, “A spring of clean water attracts the unclean and the thirsty, who hasten to bathe themselves in it and drink from it.”   This is food that nourishes my soul;  if I desire to share the love of Christ, it is in becoming a woman of peace that so touches and ministers to another.
Elder Thaddeus’ teachings have given me a greater awareness of how my thoughts dictate actions, for good or ill.  And how God will aid us when we have a desire to control our thoughts and be victorious in that battle of the mind.
Our Thoughts Determine Our Lives is a book I recommend for anyone aged 14 years and beyond.  It’s pure spiritual nourishment : )

To God be the glory for all things †

I loved this book too!

an incredible book... it spotlights the essence of Christian life. A life that with struggle is constantly moving closer to the eternal God.