Treasures on our bookshelf 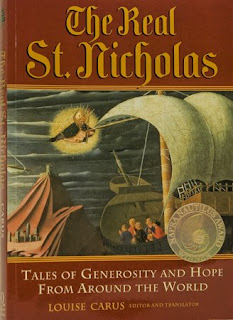 The Real St. Nicholas: Tales of Generosity and Hope From Around the World, translated and edited by Louise Carus is a new treasure on our bookshelf. I was looking round Amazon for a children’s book which told the story of the real St. Nicholas, the 4th century Bishop from Myra, when this eye-catching cover snagged my attention.

The Real St. Nicholas is a beautiful book, with colorful and varied illustrations ranging from black and white photographs of St. Nicholas Church as it looks today in Demre (formerly Myra) Turkey, to 15th century paintings, to familiar icons in the Orthodox Church. The fonts, borders and lay-out design are charming and lend itself to easy navigation among the folk tales and legends translated for the English speaking reader.

Reading this book to children is enjoyable since each tale from around the world is distinct and most are accompanied by its own illustration. The editor’s note, which appears with every narrative, gives the reader a sense of context and also the translator’s personal thoughts; these notes were a nice touch.

I’ve not read every tale yet, but my favorite thus far is The Legend of the Healing Myrrh which begins with a quote from John the Deacon’s Life of Nicholas, circa 880 A.D. :

“Then after most blessed Nicholas had departed from this world to the Lord, the tomb in which his venerable corpse was enclosed never ceased to distill an oleaginous liquid, even to this day. To the spot come multitudes of weak, lame, blind withered, deaf and dumb, and ones who are vexed by unclean spirits. When they are anointed with that holy liquor, they are restored to their original state of health.”

Since we celebrated St. Nicholas’ Feast Day on December 6th, our Sunday bulletin showed an icon of St. Nicholas on the front with a few paragraphs about his life on the back. This, too, alluded to the miraculous liquid, also called manna which was used to anoint the faithful and heal many ills. From our bulletin:

“You may find it interesting to note that in 1954, the crypt of St. Nicholas needed renovation and so it became necessary to exhume the saint’s body from the tomb. When it was time to be re-interred, the linen sheet upon which it had rested was found to be soaking wet - saturated from the manna! ..since 1980, it has been customary on the Feast Day of the Translation of the Relics of St Nicholas to Bari from Myra, for the cathedral clergy to collect the manna in an urn for later distribution to the general public.”

The Real St. Nicholas is well researched and generously offers resource pages including a selected bibliography, suggestions for further reading, sources, and a list of illustrations and credits which I particularly appreciate. This book should be a welcome addition to anyone looking for facts and illustrations pertaining to St. Nicholas, the Bishop of Myra, as well as folk tales and legends surrounding his life.

He is a precious saint, one whose life was marked by faith, kindness and acts of charity and one in which modern Christians -sometimes caught up in the materialism of the season - can identify an anchor, that chief virtue that carries all others: humility.

An enlighting post on a bishop with a story I've always liked. My mother was a school teacher and she would tell her grade 4 students the different ways to celebrate Christmas: St. Nicholas was one of them!

Thank you for posting this. I'm going out to the bookstore I frequent to look for this book.

Do you think I could borrow your copy for a few days once the season is over? Might be interesting for the children's library, but it would need to be proofed by the Fr.s first...

Sure! I'll get it to you in Jan; I should have had time to read all the narratives by then =-)