Probably like most of you reading, the Facebook phenomenon has brought some smiles and reacquainted me with long lost pals. For this I am grateful. It has been good, in some cases, very good, to again be connected with folks I thought I’d never hear from again. On the flip side, I recognize some negative features about Facebook, (which is why I’m giving it up for Lent), and probably not even the obvious one you are thinking of, but I’ll save that for a future post. For now, I’d like to share my interview with Craig, one of those long lost peeps that I am happy to have crossed paths with once again.

I came to know Craig well during our college days as we both sang & performed with the show choir; fun times! We had been out of touch for about 18 years when in 2009, through Facebook, our paths crossed again. To my surprise, Craig’s journey had brought him through an experience of pastoring a megachurch in America and since I’ve been on this topic lately, thought it would be appropriate to pick his mind on the subject. He humored me. Thanks, Craig; I appreciate your honesty, your talents and your friendship. 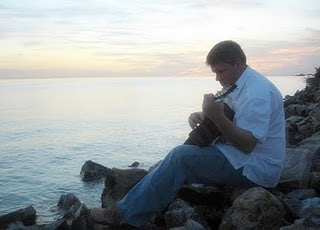 1. What church were you pastoring in 2006? How many members did you have there and how would you describe a typical Sunday morning worship service?

I was at Riverhills Church in Tampa FL. 1800 members. Worship was led by a traditional robed choir, exuberant worship and music, followed by a 35 minute topical sermon.

2. What events/seminary/training led you to this position?

I actually did not go to seminary. Mainline pentecostal organizations do not require this. A very small minority of pastors have any classical education.

3. How many years did you serve in this church? What new challenges did you face here, serving such a large community of believers?

I served in Tampa for about 2 years. The biggest challenge of service there was the age/philosophical difference. I had a very outward looking philosophy of outreach and community involvement, and although the church was large, it still had a very old-fashioned view of ministry (the pastor was supposed to do all the visiting--in truth, he was supposed to do everything).

4. What were some of the strengths of this community?

In the interest of honesty, I still deal with quite alot of anger and hurt toward the leadership of that ministry, so it's hard to say much that is good. I will say that it is culturally rich. The church was only about 45% white. Latinos, African Americans, and even Eastern Europeans comprised the rest of the body. This broadened me a great deal.

5. You wrote on your blog, “Outwardly, I was encouraging the faithful. Inwardly, I was skeptical about many things my church was standing for (and against).” Can you elaborate on this? What sort of events or situations caused your skepticism? And were you able to collaborate with other church leaders toward a resolution on these issues?

To be honest, I was already becoming skeptical even before I went there. I had enormous success in the Columbus, OH area pastoring a congregation. But increasingly, Evangelicalism was coming to equal Republicanism. And I saw Acts 2:42-27 (just one example) as having no issue with things like redistribution of wealth. But I also (and primarily) became more and more fed up with what the "church machine" required of pastors and members. More and more huge facilities were being built and financed and I just couldn't see the justification for it anymore. I thought we were spending money on the wrong things. I used to say, "What if God allowed the doors of every church building to be locked forever? What would happen to the church?" I feel more strongly on this issue now than before.

I wasn't able to talk to church leaders about this. (or about growing strife in my marriage as Debbie become more disillusioned about the glass house of ministry life). You cannot express any weakness in church work. It will be punished. I still cry sometimes thinking about what some of those fellow ministers are going through that they can't talk to anyone about.

6. What were some of the weaknesses of this community? and, do you see these as general issues facing many Protestant denominations across the US or specific to your experience?

7. In your life, has there ever been a time when you doubted God’s existence? And, if so, what event/situation/person/authors caused your faith to be renewed?

Yes, I have doubted God's existence. Not for long, but sure, I have. Authors that renewed my faith were mostly ancient (early church fathers--early middle ages). But I also gained alot of edification from Rob Bell and Mark Driscoll, who happen to be very different from one another.

8. I know from your writings that you have since left your position at this church, can you share why you left and what you are doing now?

I left because of total burnout. I eventually came to promote a local church that I did not believe in. Internal board conflicts (though few) were intense. Debbie was withering and so was I. I just couldn't take it anymore. I gave my overseer 3 months notice that I would be leaving. I turned down every offer to relocate and moved home to Ohio, where I returned to school.

9. How do you share Christ with people you meet in daily life?

Half of my closer friends now do not believe in God. I think they will all say they respect my faith more than many others' they have encountered, because I don't run from doubt. If there are historical incongruities in scripture, I am not afraid of that. It doesn't shake my faith. And my atheist friends are willing to listen more because of it.

10. I know music is a big part of your life, is this also an area of ministry for you now? Do you think people of different faiths can be brought together through music?

Music can bring people together, sure. I do not, however, believe that people of differing faiths can find harmony and utopia through music. Just a common love for the song.

11. What plans do you have for the future, after graduation?

I'm not sure, Amy. I have been accepting into both OU's MBA and PhD in History programs.

12. What advice would you give to a young seminarian who has hopes of leading a megachurch in America?

My advice will probably not be popular: DON'T lead a megachurch. I find it irreconcilable with God's plan and building his kingdom through relationships (oikos). Megachurches, for the most part, entertain. Relationships edify. I would advise finding a small church by the side of the road with no debt and getting to know his/her community over a lifetime, even if his/her name never becomes well-known.

Excellent interview. I can relate to Craig on so many levels, since I've traveled down a very similar road. I appreciate his honesty and openness on these sensitive subjects, and wish him the best in finding his truth.

That was a great interview. Sobering advice at the end. I appreciate his honesty and I'm sorry he's had to go through so much difficulty. I hope he finds what he is searching for.

I recently came across your blog and have been reading along. I thought I would leave my first comment. I don't know what to say except that I have enjoyed reading. Nice blog. I will keep visiting this blog very often.

This is such an interesting interview. I admit to seeing what Craig did and feeling repulsed as my view of megachurches is one of repulsion. But when I opened my mind and heart and read his answers to the questions, I felt such compassion. Thank you for posting this Amy, and for your thughtful comments on my own blog. I so look forward to reading more of yours!

Glad to read your comments and know that you appreciated Craig's interview; I think we all have a story to tell and so much the better when we can learn from others.

Enlightening interview. Thanks for sharing it. I've seen so much of what he shared. The attitude toward failure and sin is particularly tragic.

I certainly have empathy for Craig and anyone else going through the struggles of churchianity.

I also have no doubts that there is indeed much more to the story that could be told from many different viewpoints.