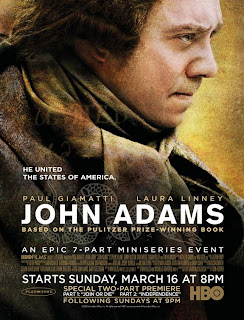 We’ve recently finished watching the entire 501 minutes of John Adams, the miniseries originally featured through HBO, now available on a three part dvd set.  Although it took us a few months to squeeze in those minutes, it was worth it.

The series, which spans America’s first 50 years, was directed by Tom Hooper with the screenplay  based on the book, John Adams, by David McCullough.   Paul Giamatti and Laura Linney were outstanding in their portrayal of John Adams and Abigail Adams and the love story between the two was an unexpected delight.

I don’t know my history well enough to say if the series was 100% accurate with regard to historical events, but then I love a movie that spurs my interest in historical figures I previously thought dull.  I’ve done some light reading on the John Adams family since watching the epic and marveled at the story of his daughter, affectionately known as Nabby.

Aside from being reminded of the wonders of our advancements in the medical field, particularly anesthesia, my appreciation increased for our founding fathers as a whole.  Their intellect and vision for this nation is something that seems altogether lost in our modern age.  I couldn’t help but wonder what Thomas Jefferson and John Adams would think about our current state of affairs.

My only criticism of the miniseries is that on the 2nd dvd, which includes the time period when Adams was away in Europe as Minister Plenipotentiary,  the story is continually far removed from the action of the Revolution.  It probably seems absurd to say that a series over 500 minutes long could be fleshed out, but I would’ve enjoyed fewer scenes of Adams and Franklin in Europe and more of General Washington on the battlefront.  David Morse was excellent as George Washington and I enjoyed the nuances that his part brought to the credibility of the story.

The ending was marvelous, a perfect way to conclude the story of his life and legacy.  It’s a blessing that so many of Adams’ words were recorded for posterity, especially those written to Abigail, his beloved friend, counselor and wife of over 50 years.