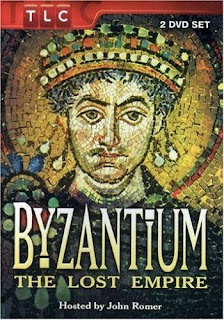 I’ve just watched the 2 part series, courtesy of Netflix, of John Romer’s fascinating program produced by The Learning Channel (1997). This is the type of documentary I enjoy most, feeling as if I’m not just a passive observer, but intensely engaged in the commentary and scenes opening up before me. And, in the case of Romer, it’s like following a friend along the ancient streets of Constantinople, over 15 centuries ago. A gentle speaking friend who knows the place well and is anxious to share it with you in that most pleasing British accent.

This was the perfect introduction to the ancient empire of Byzantium, which was the center of Christendom on earth for over 1,000 years. I’ve had a keen interest in Byzantium since converting to Orthodoxy... the icons, architecture, the court, including such notable figures as St. Justinian and his beloved wife, St. Theodora. Mr. Romer is so gifted in this work, displaying not only his thorough historical research, but presenting it with such care, ...even poetic at times. His love of ancient peoples and this era of Christendom in particular is obvious throughout the film. 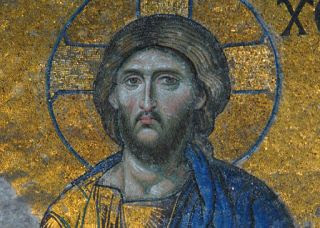 I was amazed to know that the great Hagia Sofia, the famous cathedral of the ancient Byzantines, is still standing. Originally built in the 4th century, after the Turks conquered Byzantium in 1453, it became a mosque and then a museum. The entire history is fascinating; thankfully we still have relics, icons, sculpture and other artifacts to provide a glimpse, a window back into this glorious era.

The music in the documentary is a nice touch, too as we travel from busy, modern day Istanbul (ancient Constantinople) back to the days of Emperors worshipping in some of the most splendid cathedrals our world has ever known.

Thank you for posting this. We've just been studying this in history and I will look for the movie. This will be a great adition to our studies.

I'm shallow so all I'll say is - great earrings.

if you liked this you may also enjoy:

"The Other Holy Land"

"The History of Orthodox Christianity"

both are available at Netflix.

Thanks for the heads up about this one.

We enjoyed this documentary, too.