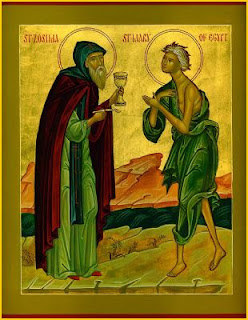 The life of this great saint is commemorated during Great Lent and as such, I find it fitting to read her story at this time of year. Handily, Frederica Mathewes-Green included the Life of St. Mary in the Appendix of her book, First Fruits of Prayer: A Forty-Day Journey Through the Canon of St. Andrew.

Mary’s life is fascinating and one that inspires us toward repentance and holy living. As her story goes, while in her youth during the sixth century, Mary indulged in sexual perversions, not accepting payment as a prostitute, but readily giving her body up to every kind of sexual experience. “I held in honor every outrage to nature” she tells the priest Zosimas, who finds her many years later living in the desert outside of Jerusalem.

As her youthful experience continues, she learned of a boat sailing to Jerusalem to attend the Exaltation of the Holy Cross (the cross St. Helena had uncovered in the 4th century) and offered her body as payment for taking her aboard. Upon arrival, a crowd fell upon the Church of the Holy Sepulchre and Mary joined them.

As Mary made her way through the throng, she tried repeatedly to enter the church, but an invisible force prevented her from crossing the threshold. Exhausted from her efforts, she removed herself to a small corner where she says, “little by little I began to understand the reason why I was being prevented from looking upon the life-bearing cross of the Lord. The word of salvation gently touched my heart, and revealed to me that it was my unclean life which barred the entrance to me.”

Shame gripped Mary and in humility, she repented of her sinful life and prayed that she might be able to enter the church, promising afterward to renounce worldly temptations and follow where God would lead her.

This is how she came to dwell in the desert beyond the Jordan river. For 47 years she lived as an ascetic, overcoming her passions and being blessed with Divine gifts. Zosimas was astonished to meet her, recognizing he was in the presence of a saint by her gift of clairvoyance and seeing her levitate during lengthy prayers.

A full version of her life may be found here or here as recorded by St. Sophronius.

St. Mary of Egypt reminds me in a blessed way that the healing Light of Christ shatters the most depraved spirits. She inspires me toward perseverance, knowing that her struggles against sinful desires were overcome. It took many years, but she did not give up, she did not give in... she ran the race well and kept the faith.