Just pondering some discussion from our adult class at church.
I've become aware of a viewpoint I had never considered before: that, for some, communion is only received once or twice a year. Some of the older generation view frequent partaking of the Lord's Supper with curiosity. Some believe if it is received too frequently, it may become casual or taken for granted. And, honestly, are the communicants really prepared? 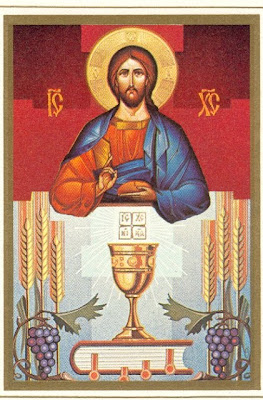 Hmmm.
Oddly enough, one of the reasons I found such joy in the Orthodox Church was because at each service, in every Divine Liturgy, we celebrate Holy Communion! I often felt in my Protestant church, that relegating communion to once a month and at that, frequently at nighttime services only, was to seriously miss an important part of church life.
Just as our prayer before receiving Holy Communion says at the end:
" May the communion of Thy Holy Mysteries be neither to my judgment, nor to my condemnation, O Lord, but to the healing of soul and body. Amen. "
Being received at my Lord's table is for my
nourishment of soul and body!
Medicine! I need that as often as its available to me.
Lord have mercy if I ever take for granted that which is
offered for my spiritual health.
Posted by amy at Monday, February 21, 2011

Well, I can completely sympathize with their concern for reverence of the Holy Mysteries. It is something I wonder about in myself (am I really taking this as seriously as I should or am I looking at is as "my right" as an Orthodox Christian). Do I respect it as a Gift with thanksgiving and humility or am I an ungrateful, spoiled child?

OTOH... are we ever really prepared?? NO.

And, I wonder what their answer would be if you asked them to have marital relations 1-2x per year to "keep it special." ?

I know of those who are of this practice; but it is not, from what I understand, what was suggested by the church fathers ... many more recent Saints have encouraged more frequent communion...

it is good I think to realize that we are never fully ready or indeed that we are very unworthy...

This has been a topic of concern to Lutherans over the centuries. The Reformation continued the every service (and every festival) communion practice. But the influence of Reformed theology and rationalism took its toll and by the 18th century the frequent, regular Lord’s Supper was rare.

In the last 40 years there has been a renewed interest in this. Every congregation I have served as pastor began celebrating the Lord’s Supper every divine service... not because I demanded, but people studied the New Testament and wondered, “Why don’t we celebrate it every divine service?” Good question. Then people began to ask for it. What a thought- people desiring for God’s free grace.

For those who say it loses it “special” character with every service implementation, I always ask wives if they get tired of hearing their husbands say “I love you.” In 30 years of asking the question, not one wife has said she gets tired of it, even if he says it every day.

So, think of the weekly Sacrament as God’s “I love you” chorus. Should we say, “No, thanks, God. I have had enough of your love and forgiveness”?

As always, thought-provoking. Thanks.

Great thoughts, all - especially the analogy of love between husband & wife.

Rich,
So nice to hear from you again. I appreciate the insights you shared. And yes, that's very amazing, very inspiring to know that congregations were asking for more frequent communion at the Lord's Table. What an encouraging thought!