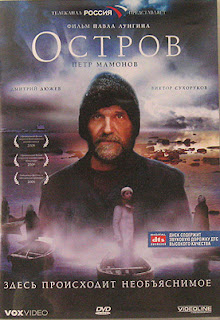 Octpob, is the Russian film that is currently being acclaimed in Orthodox circles and with good reason: excellence. This film sets the bar on several fronts including cinematography and powerful themes expressed poignantly through stark minimalism.  I fancy St. Benedict would smile at how well the monastic life is portrayed in Octpob.

For those who may not be familiar, Octpob (“Ostrov” meaning, The Island) is a Russian film (available with English subtitles) about a fictional monastery located on an island within Russian borders during the 20th century.  The story is focused upon the main character, Father Anatoly, who seems a most unlikely vessel of Divine gifts and his relationship with his fellow monks.

Thankfully, the film moves slowly which makes following the subtitles rather easy.  I found the Russian language as beautiful as the film itself; it is worth watching several times in order to harvest the pearls of wisdom scattered throughout.

There are several themes I could write about with regard to Octpob, but growth of stability comes foremost to mind as I have been re-reading St.Benedict’s Rule (6th century) lately.    To state it quite simply, St. Benedict believed stability entailed meeting God exactly where you are, not seeking to escape the mundane, but accepting the present reality as our medium to commune with the Creator.

In the movie, the monastery is located in a very desolate, forbidding place full of rock and snow.  A harsh world with much labor, little food and, to a casual observer, dim color.  Father Anatoly’s job is to tend the furnace and we see him toiling at this dirty and monotonous work daily, for years on end.

How easy it is for the viewer to imagine this drudgery, this dull work and to abhor the thought of it.   Maybe also, it would be easy to relate Father Anatoly’s work with our own, perhaps a colorless office job or toil in the coal mines: dangerous, dirty and thankless.   And then, to think  ‘only if ...’    We may seek to escape and believe true happiness will be found somewhere else, someplace more fulfilling, in another job, another mate, or a bigger house.

“Stability”, as St. Benedict would have you know it, is apart from geographical space and routine, but rather an internal, spiritual place of the heart.  Stability allows for strength, creativity....even joy in the heart of mediocrity.  There is great beauty to be born out of drudgery when the heart is fixed on God:

Stability is achieved through perseverance: waiting in long lines, traffic jams, loading groceries in the rain, parenting tired grumpy children, tempering anger at some injustice, recovering from illness .....the list goes on.  Stability says it doesn’t matter the place or time or routine. When our heart is fixed upon God, we have an unending reservoir of peace that affords us growth in God’s abundant grace.  Or as one monk put it, 'an anchor that holds me in a restless sea'.

Romans 5 tells us to exult in our tribulations, that they bring about perseverance and perseverance, hope.  This is the path of the saints.  Or, as a Desert Father said, "The reason why we do not get anywhere is that we do not know our limits, and we are not patient in carrying on the work we have begun.  But without any labour at all we want to gain possession of virtue."

The world will lead you to believe in a quick fix.  The path to true joy, strength and hope comes only from Christ; He leads us on the high road, to virtue and salvation.

I highly recommend Seeking God- The Way of St. Benedict by Esther de Waal if you are interested in understanding the Rule and practical application for  Christian living.

I was so happy to run across this old post on a wonderful movie. I haven't watched it enough times...maybe it's time for another showing around here. Thanks for taking the time to review it.