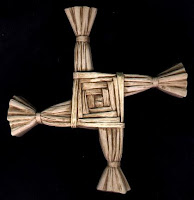 In a popular icon of St. Brigid she is depicted with her handmade cross of rushes.  I have one of these crosses on my living room wall and have found it is usually a conversation piece, with one guest believing it was some sort of ninja tool!   Legend says that the saint formed this cross in order to minister to a dying man; one version goes like this:

"A pagan chieftain from the neighborhood of Kildare was dying. Christians in his household sent for Brigid to talk to him about Christ. When she arrived the chieftain was raving. As it was impossible to instruct this delirious man, hopes for his conversion seemed doubtful. Brigid sat down at his bedside and began consoling him. As was customary, the dirt floor was strewn with rushes both for warmth and cleanliness. Brigid stooped down and started to weave them into a cross, fastening the points together. The sick man asked what she was doing. She began to explain the cross, and as she talked his delirium quieted and he questioned her with growing interest. Through her weaving, he converted and was baptized at the point of death. Since then the cross of rushes has been venerated in Ireland."

I think it's interesting to note that both St. Patrick and St. Brigid utilized elements of nature, shamrocks and rushes, respectively, in order to minister to those seeking the Divine. It calls to mind Romans 1:20, "For since the creation of the world His invisible attributes are clearly seen, being understood by the things that are made, even His eternal power and Godhead, so that they are without excuse..."  All the firmament shouts His glory, how much more in the hands of His precious saints!
Posted by amy at Tuesday, February 03, 2009

I just realized! Sunday was your nameday. Hope you had a lovely day.

I had a feeling you were going to post an article about St. Brigid's cross! You can find me on FB by searching for Diane Xenia Moos. Looking forward to connecting!
-xenia

Xenia, Nice to connect with you on FB. Hope you had a lovely Name Day as well =-)

Ninja tool is okay... really. Someone I know was convinced it was a swastika and spent an inordinate amount of time trying to connect Brigid to Hinduism (no Nazis I'm glad to say).

I enjoyed reading this and look forward to reading more. I was recently called home to Orthodoxy, and also took St. Brigid as my Patron Saint. I am not yet Chrismated, but look so forward to that happy day! God Bless!

Yippee! I'm only a few months late--finding this posting, but St. Brigid never goes out of style. Amy--how wonderful to find you here on the web. Welcome to Orthodoxy--and you chose St. Brigid for your patron. You will be blessed indeed.

Since I noticed you have children, you might be interested in my new picture book on St. Brigid :) You can find out more on my website www.janegmeyer.com or see it listed on Conciliar's website... Anyway, like you, I love her--and am trying to inspire more children to know her and follow in her footsteps.
Blessings...