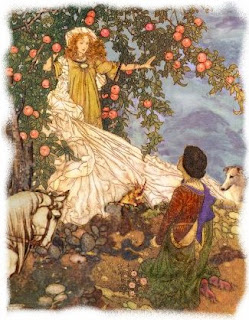 One of the many treasures Orthodoxy has brought to my life has been the doorway to the lives of the saints.  Before discovering the ancient faith, I had only a vague notion

of those men and women whose lives shone forth the light of Christ.

Nowadays I am introduced to a new saint on a regular basis.  Sometimes through church or Ancient Faith Radio or a book I’m reading.  Occasionally I find someone new while surfing the net perusing the latest works of my favorite artists.  With each new discovery I find such interesting tidbits and places to include on that “Must See!”  list.

While browsing Patricia Banker’s latest pieces (pictured above), the beautiful illustration and story of Saint Melangell (pronounced Mel - eng - eth) captivated me.    She is a 7th century saint from Wales that renounced her royal heritage to live in the forest and devote her days to prayer and solitude.

As the traditional story is told, she fled from her father when pressed to marry and settled in Pennant, at the head of the Tanant Valley in Northern Wales.  There she lived for 15 years in solitude until she was discovered by the Welsh Prince, Brochfael Ysgithrog while he was hunting in the area.   As his hounds pursued their prey, the frightened hare ran to St. Melangell and hid in the folds of her garment.  The hounds were quiet and refused to snag the hare, much to the amazement of the prince.

Prince Brochfael was so moved by her beauty, purity and love for God that he asked her to marry him.  When she refused, he gifted her with a large parcel of land to be used as a monastery and sanctuary for people and animals.  This area became known as Pennant Melangell and the beautiful saint became Abbess of a religious order there.  Pilgrims still visit this sacred area even to this day.

According to the St. Melangell’s Church website, there has been a christian church in this area of the Berwyn Mountains for over 1200 years.  St. Melangell’s Church (pictured below), a simple Norman structure, has been beautified over the years with the most recent rebuilding being completed in 1990.   With the blend of Celtic and Romanesque motifs, 15th century carvings, bronze statuary and a natural outdoor landscape with ancient Yew trees, I could breathe in this piece of heaven for several days. 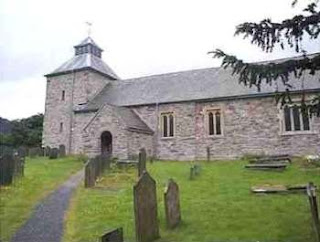 St. Melangell remains the patron saint of hares and other small animals as well as the natural environment.  In Wales, St. Melangell's feast day is celebrated on May 27th; the ancient feast day is marked as January 31st.

I always love the stories of saints and animals! I wonder if the fox has a patron. There is one in our neighborhood with an injured leg, fox that is.

I don't know about the fox. I'll have to look into that one!

I will pray for your fox, Shelley.

I think Prince Brochfael was an enlightened character for his day - usually amorous/wife-hunting princes caused would-be nuns and hermits no end of bother.

St Melangell is also one of my favorites. I was glad to find your post about her. God bless you!

What did St. Melangell do to become a saint and what is her symbol?