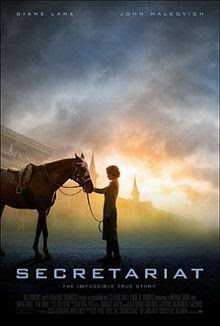 As you long time readers will know, I’ve shared my life with horses since I was 6 years old and consider the horse God’s most noble creature. I’ve written about Secretariat before and have just watched the new Disney production of his amazing life.

Having watched some interviews with Penny Chenery beforehand, I learned that she was consulted during production and gladly endorsed this film. That meant something to me as I have a concern for biographical films to remain as true as possible to actual events.

Diane Lane, as Secretariat’s feisty owner, Penny Chenery, delivers an outstanding performance along with John Malkovich’s portrayal of unconventional trainer, Lucien Loren. There was much of the story surrounding this incredible horse that I was unaware of such as the sacrifices made and circumstances surrounding his birth. Big Red, as he was most often called by those who loved and cared for him, lived a beautiful life and inspired millions with his athletic ability. No less inspirational is the warm tale Mike Rich created to share the story of the Chenery family.

The prologue and initial scenes brought me right into the film; horse lovers everywhere are probably familiar with the passage spoken of in the book of Job (chapter 39) from the Old Testament:

"Hast thou given the horse strength? hast thou clothed his neck with thunder? . . . the glory of his nostrils is terrible. He paweth in the valley, and rejoiceth in his strength: he goeth on to meet the armed men. He mocketh at fear, and is not affrighted; neither turneth he back from the sword . . . He swalloweth the ground with fierceness and rage".

Is there anything more thrilling than hearing and seeing a horse at full speed, thunder over the ground?

I liked this film, but was very disappointed in the soundtrack as well as a lag in the middle of the film. Instead of fleshing out Secretariat’s training and Lucien Loren’s relationship with him and the jockey, Ronnie Turcotte played by Otto Thorwarth, there is a lull of scenes with Diane Lane that didn’t add very much to the story. I guess for those who are just being introduced to the greatest racehorse that ever lived, it’s not a bad start. I wanted more depth. I kept comparing this film to Seabiscuit (2003) directed by Gary Ross whose racing scenes were superb and story intricate. Mr. Ross directed in such a way as to bring Seabiscuit up-close and personal; at the end of Secretariat, I felt I was still at a distance admiring him.

The soundtrack accompanying Secretariat is the worst match I’ve ever seen. Most of the time, the music isn’t that memorable on the first go-round because it blends so well with the subject matter. In this case, during a few significant scenes, the music was so out of sync, so incompatible with the setting, that it brought my free flowing high emotion to a screeching halt.

I hoped for an engaging epic, but got a warm & fuzzy lightweight Disney to cherish Big Red’s enduring memory.

Please, someone make an epic so we can savor a moment in racing history we’ll never witness again.... please...Mr. Ross?