St. Herman, the Wonderworker of Alaska 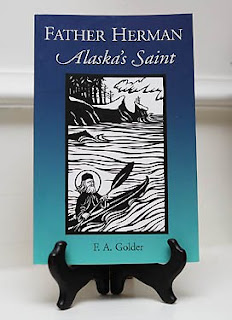 Never underestimate the power of reading aloud. I don’t believe we outgrow the enjoyment, the wonder and connection with others through storytelling. I am so glad my children still enjoy this and that my husband & I read to each other on occasion, too.

We’ve just finished reading Father Herman, Alaska’s Saint by Frank Alfred Golder with papercut illustrations by Nikki McClure. F.A. Golder, in the early 20th century, provided the first English account of the life of St. Herman (1757 - 1836) and even though this book is rather brief (68 pages), it provides powerful inspiration to the soul to learn of a saint so close to our own time. The papercut illustrations are a unique and expressive compliment to the Life documented within the pages.

Father Herman was born near Moscow, Russia in the mid 18th century and as a young man of 16 years, entered the monastic life at Trinity-St. Sergius Monastery near St. Petersburg. It was here that Fr. Herman claimed to have been miraculously healed of an abscess beneath his chin, after seeing a vision of the Theotokos and praying before her icon during the night.

A few years later, Fr. Herman transferred to Valaam Monastery on Valaam Island in Lake Ladoga, Russia. It is written that he loved the solitude and beauty of Valaam and I particularly enjoyed F.A. Golder’s description of Herman (as taken from his visit to Valaam Monastery in 1914) :

“Fr. Herman’s attractive personality and kindly ways soon made him a favorite with the other monks, so much so that even to this day they speak of him as the holiest among them. They point to a place named after him, Germanova, where he was wont to wander off and pray 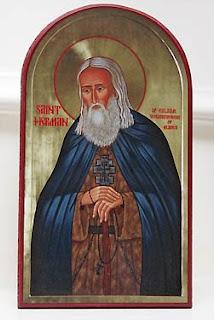 for days at a time until the brothers had to go and bring him back. They tell of his religious ardor, of his gentleness, and of his sweet tenor voice, which was like that of an angel. Fr. Herman had the soul of a poet and there was much about the monastery that appealed to his sense of beauty...flowery fields, shady forests, wild birds and snow-clad trees, ice-covered lake, the mighty wind and raging storm..”

While at Valaam Monastery, Fr. Herman was selected by the Holy Synod along with 9 other monks and deacons to be on the first missionary expedition to preach the Gospel to the Alaska natives. They set out from Moscow on January 22, 1794 and after crossing Siberia to Okhotsk, finally arrived on Kodiak Island on September 24, 1794.

The mission was very successful, as the Orthodox missionaries were bringing the light of Christ to the natives and showed much love and respect for these people, the Alutiiqs. They soon found themselves in the role of protector, however, as those bitterly opposed to the mission, chiefly the Russian American Company, were abusive to the native people and sought to drive the missionaries out.

By 1806, the conditions set forth by Baronov’s Russian American Company became so cruel and abusive that all the missionaries were either killed, demoralized or fled to other places....save one.

“Trials and tribulations made him only stronger, and he would under no circumstances desert his people and let them slip back into the power of the devil.” F.A. Golder

He did, however, realize that the cause of Christ could be advanced more quickly away from Baranov, and so, he opened a new mission on the uninhabited island of Elovoi (Spruce) which he named New Valaam in memory of his beloved monastery in Russia.

This book is such an engaging read; Part II contains documented miracles attributed to Saint Herman that have kindled my own desire to make a pilgrimage to Spruce Island. 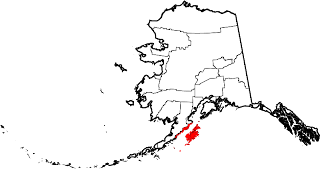 Map highlighting Kodiak Island and surrounding islands. Spruce Island is located to the east of Kodiak and south of Afognak Island.

In 1970, Herman became the first saint to be glorified concurrently by the Orthodox Church in America and the Russian Orthodox Church Outside of Russia. He is affectionately known as the Wonderworker of Alaska and America’s first Saint and remembered by the Church on August 9 and December 13.

*Icon may be found at Come and See Icons

How lovely. He is the first Saint I knew, as my first church I went to and was made a catachumen at is dedicated to him...

I love your blog! God bless you! I am a convert too....since 1992. We have much in common, and I am so glad today to find your blog. I haven't had much reading time lately, but I will consider some books you've read for my reading list. It's great to see more online orthodox friends. :) Have a wonderful day, and thank you so much for the time you put into your blog. I wish mine looked that good. LOL Oh, well, maybe some day. I will probably suggest that my daughter read part of your blog for school today. :)

Ah! Elizabeth, that is good. What a wonderful Saint to welcome you into Orthodoxy. Are you anywhere near Alaska?

God Bless you, too!

I will have to check out your blog as well, as your kind words made my day! Indeed, it is so nice to have an online community of kindred minds and hearts..

I'm with you on reading aloud.

This book looks like a must get. Thanks for sharing it with us.