Lily of the Mohawks 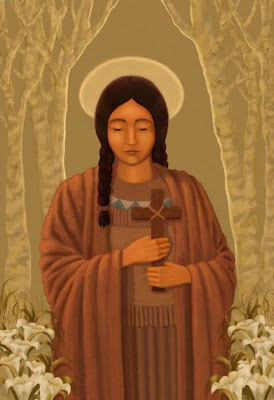 Upon her death, on April 17, 1680 (Holy Wednesday), Fr. Pierre Cholenec states in his journal:

“Then, her face had suddenly changed, which appeared so smiling and devout that everyone was extremely astonished – her face that had transfigured gradually in less than a quarter of an hour, because of smallpox that it left her face scarred from the age of four, which her infirmities and mortification had contributed to ruin her even more. Catherine’s face was so scarred from smallpox and before her death that she took a darken complexion. Then, her face had suddenly transfigured about a quarter of an hour after her death and became in a moment so beautiful, smiling and white. Her face assumed an appearance of a rosy colour that she never had and her features were not the same. Her face appeared more beautiful than when she had been living. I will admit openly of the first thought that came to me that Catherine might have entered into Heaven at that moment.”

Blessed Kateri Tekakwitha (1656-1680), also known as Lily of the Mohawks, was beatified by Pope John Paul II in 1980. I discovered her story last summer through unrelated reading about Native American spirituality and find that she comes to mind frequently when I contemplate the nature of love and sacrifice. She was the daughter of a captive Algonquin Christian and a non-Christian Mohawk father. The young Native American came to know Christ through her mother and Jesuit missionaries; her life testifies an enduring devotion to Christ.

Kateri suffered much persecution from her people upon her conversion and baptism, but even so, she said she often meditated upon the “dignity of baptism” -- such a beautiful thought.

Her feast day is celebrated in America on July 14th, in Canada on April 17th.

Incidentally, it was in 2008 that I made another related connection: Frederica Mathewes-Green’s podcast, interviewing an Orthodox convert sharing insight on how closely Native American spirituality is with Orthodoxy:

Listen to the Podcast

Email ThisBlogThis!Share to TwitterShare to FacebookShare to Pinterest
Labels: Kateri Tekakwitha, Lily of the Mohawks, Native Americans and Orthodoxy

God is so amazing, always at work in places we would not imagine. Thank you for this wonderful story. I downloaded the podcast and will listen to it.