Reading the Saturday mail, I noted some interesting facts as pertaining to Afghanistan.  It was only a small paragraph, certainly not something you’d ever find on the front page of the liberal Gazette:

-Afghanistan has held two peaceful elections, with women casting 40% of the vote.

-The child mortality rate has dropped 25%

The number of children enrolled in school has risen from 900,000 under the Taliban to 5 MILLION today including 2 million GIRLS.

This is why wars are fought.  This is why loyalty to the sanctity of human life will always prevail.   It is the Truth of the Divine in us that keeps men sane, for in the end, the only true strength in this life resides in virtue.  Men can stand on integrity, self-control, honesty, and Truth but may die a thousand deaths from betrayal of conscience.

“The light shines in the darkness, and the darkness did not comprehend it”.  St. John said that.  It’s one of my favorite verses from the Bible because it is a daily reminder that no matter how vile, no matter how dark the valleys, the Light will always prevail.   That Light is in every one of us who profess belief in Christ as Lord and Saviour of Life.  We are the hands and feet of God.  It is us who take that Light into the dark places of the world. 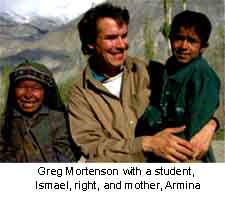 One such light I came to know about several years ago: Greg Mortenson, an American and co-founder of the Central Asia Institute.  He is also the author of the best-selling, Three Cups of Tea about his remarkable journey to build schools in northern Pakistan and Afghanistan.  As quoted from his website (photos are also from his website) :

“As of 2007, Central Asia Institute has successfully established 58 schools in Pakistan and Afghanistan, which provide (or have provided) education to over 24,000, with a emphasis on girls' education. A few additional projects are in Mongolia (rural health education) and Kyrgyzstan (teacher training scholarships).”

He is a hero; he understands the heart of war with a deftness that I perceive little of in the brash political arena.  Mr. Mortenson has been unafraid to take on the battle at the front-lines for 15 years now, arming children and communities with the power of literacy, health care, education, conservation.  He understands the connection between valuing and nurturing life and long term peace.

My hat is off to our men & women in the U.S military who must battle not only with reckless hate from our enemies, but the weak media machine that perceives so little of Truth.   And thank you, Greg Mortenson and the Central Asia Institute, for working to promote peace by touching the heart of new generations in a war zone.