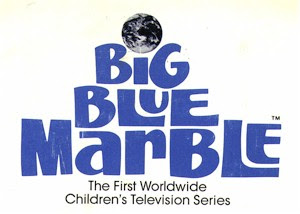 Remember this show from the ‘70s? As a young girl, I anxiously awaited each new episode to gain a fresh perspective on the world around me. The 30-minute television series highlighted stories of children from around the world and encouraged viewers to join the Big Blue Marble pen pal club. This I did with enthusiasm; I can still remember the excitement of receiving that mail from Santa Barbara, CA, telling me the contact information of the pen pal I had been matched with. I corresponded with several pen pals for years, recalling in particular my pal from Ireland that would tell me first hand accounts of the violence she witnessed in northern Ireland during the political/religious unrest during the 1970s. The Big Blue Marble introduced to me a love of other cultures that continues to this day.

When I began blogging in 2007, it was primarily to write for myself. Probably like some of you, I find writing therapeutic, a creative outlet that never fails to lift my spirits and exercise my mind. But here, three years later, I am discovering other benefits and joys to blogging, not the least of which is connecting with other like-minded individuals around the world. To read about the daily activities of a homeschooling mom in Ireland, an inspiring church service in Scotland, insights from an American living in Russia or heartfelt encouragement from a nun in Greece ... the wonderment first discovered via The Big Blue Marble is alive and well in me.

I feel like I've come full circle in a sense because now I'm not only connected with kindred minds, but I have mentors as well - although they probably don't know it. Blogs such as Ten O'Clock Scholar, Charming the Birds from the Trees, Deb on the Run, Gladsome Lights and Cherished Hearts at Home to name a few, encourage me on a weekly, if not daily, basis. These authors, women/mothers/followers of Christ, have influenced me more than I can adequately describe; their writings and experiences are a testimony to godly living and the art of making a house a home. You inspire me toward that ideal of a Proverbs 31 woman and I’m grateful.

oh my! Thank you so much for those lovely comments. When you were talking about "homeschooling mom in Ireland, an inspiring church service in Scotland, insights from an American living in Russia or heartfelt encouragement from a nun in Greece ." I said to myself, "I want to read those blogs too."

I do agree about the blessing of connection with people so far away.

Wonderful grace of God! Glory to Him for all things, including these encouraging connections He provides for us.

Amy - wow, thanks for your kind comments. I'm humbled to be mentioned in the company of bloggers you listed. Really.

And I remember the Big Blue Marble, too!

smiles. it is so great to find those kindred spirits that push you toward such an amazing goal.

wow...
i had almost forgotten about that big blue...
wow flash back indeed!

loved this post...
it is a small world, one which He has blessed for us all :)

i have selected to follow your blog...i hope you don't mind.
please let me know if you would rather me not (or if you prefer me to follow privately)

I would be honored for you to follow my blog; what a nice compliment.

I've spent some time this a.m. looking round your site and with your permission, would like to add it to my blog roll as well. You are such a talented individual ...not only with your writings, but graphic design and photography as well - a feast for the eyes and heart.

You describe well the beauty of blogging. God must smile as He sees His children connecting this way.