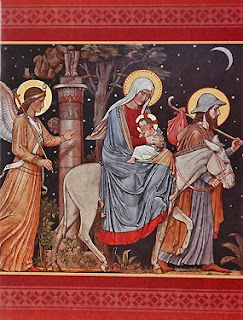 “Now when they had departed, behold, an angel of the Lord appeared to Joseph in a dream, saying, “Arise, take the young Child and His mother, flee to Egypt, and stay there until I bring you word;  for Herod will seek the young Child to destroy Him.”

This is a photo, depicting the flight into Egypt, from our Christmas cards this year, purchased from The Printery House.    It caught my eye because of the colors and I like the artistic style.  The card itself is a photo of a mural created in the Basilica of the Immaculate Conception at the Conception Abbey in Missouri, painted by Benedictine monks in the late 19th century.

The symbolic imagery in the mural piqued my curiosity and this is what I learned:  the crumbling idol in the background is based on Thoth, the Egyptian baboon or monkey god of mathematics, writing and wisdom.  The idol is clutching a writing implement as it topples to the ground while the Holy family passes by.

At the base of the cracked column, you can notice the date 1896, which is when the fresco was painted.  A Lilly-of-the-Valley is blooming near the feet of the Theotokos while poisonous mushrooms grow near the base of the column.

On the Conception Abbey website, it is noted that the donkey's feet are not painted in the proper positioning for walking and yet, I hardly think this detracts from such a splendid portrayal.

I tend to think so much of the Nativity as a moment that stopped time, when the shepherds were near, the cows munched their hay and Blessed Mary knelt in the glow, adoring the newborn King.  In my mind, the star of Bethlehem that led the wise men to worship Christ, is forever held there.  It is good to hear the Gospel every Sunday morning, to be reminded of Jesus’ journey after his miraculous birth...to think on the perilous trek that Joseph and the Blessed Virgin underwent to keep the Christ-child safe.  To think of the wise men who risked so much...

Glory to the newborn King!

An important part of the Christmas celebration.

You there, this is really good post here. Thanks for taking the time to post such valuable information. Quality content is what always gets the visitors coming custom sweaters