A measure of God's grace

About 5 years ago I was walking through a valley so deep I couldn’t see the sunlight or feel its warmth;  I wondered if God had abandoned me.  I never quit praying but couldn’t comprehend why He wasn’t helping me through this desolate place.  It was a very lonely time; I came to know that isolation is the devil's playground.

I learned some valuable lessons through this darkness however:  that we must rejoice for our trials because they draw us nearer to God and give birth to perseverance and that God, in fact, does NOT ever abandon us.  Sometimes we have to cling to Truth in Holy Scripture (Psalm 94) and forsake our feelings which can lead us astray.

It was during one particular wintry day that I recall feeling forlorn, weeping and telling God how much I needed Him, that I was such a weak vessel and needed some reassurance that all would be well.  I felt guilty even as I prayed it, asking God for a sign of His nearness.  As if my very life was not evident enough of His care!

Brewing a cup of tea, I walked by the kitchen window and glanced out at the familiar wooded landscape.  The sky was gray and atmosphere dismal but for a brilliant glimmer that caught my gaze:  5 male cardinals perched together in our spruce tree.  There they were, just sitting near to one another in about

an arm span in proximity, all looking down toward my window.  I don’t know how long I stood there watching them... they weren’t eating or flitting about, just being still ...peaceful.

Typically we see cardinals, bluejays, chick-a-dees, tufted titmice, sparrows, wrens, juncos and doves in our yard, but I’ve rarely seen two male cardinals in the backyard at the same time, let alone five sitting together.  And, whether you will interpret it as  mere coincidence or a blessing from heaven, the effect is the same.  For it was in that moment that I felt God’s presence and peace of mind. ..and thanked Him abundantly for it.  If you aren't familiar with the songs and call of the cardinal, listen here. 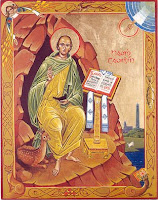 I’m frequently drawn to reading about the saints who held close relationships with animals, such as St. Seraphim of Sarov who had such grace given to him as to receive a taste of blessedness on earth; his affinity with wild creatures is well known in the Orthodox Church.  Or St. Columba, whose close bond with a horse caused the creature to bid him farewell before his death.  St. Kevin (pictured right) also comes to mind as his icon represents the black birds and other creatures that blessed his life.   It is from the stories of the saints that I believe God can and does minister to us through creation.  ...even those of us who are not saints but love Him and seek His face.

For me anyway, it seems that cardinals often carry a measure of His grace as this is not the only occasion that I’ve been so touched by the little red birds.   Praise God for all creation, in whose hand is the breath of every living thing...

what a lovely lovely memory for you.

Have you read Saint Ciaran: The Tale of a Saint of Ireland? I think it's one we should get for the bookstore/library one of these days. It's a wonderful story about gentleness and evangelism.

God is never far from his children. All we have to do is ask for help, whether out loud or think about it. He's there, among his angels the messengers.