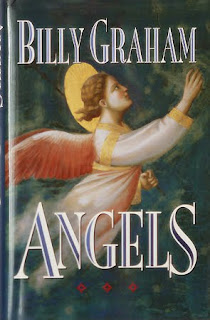 Celestial beings have been the topic of conversation lately, not only in our adult sunday school class but with family as well. At church, George (our teacher) referenced a book I had read years ago and has since been pulled from our bookshelf for a fresh glance. Billy Graham, perhaps the most recognized evengelical christian ever, has fans among Orthodox christians too. It gladdens my heart to know that he even wrote in one of his books that Mary (the Theotokos) was not given her proper due by Protestants. When it came to the subject of angels, he realized in the '70s that not many books were written about them, and so he set to work in writing one of his own.

The result is this little hardback book titled simply, “Angels” containing nearly 200 pages of biblically based information regarding the organization and function of angels, also part of God’s created world.

“For He will give His angels charge concerning you, To guard you in all your ways.” Psalm 91:11

Holy Scripture makes some 300 references to angels, how they are sent as messengers of God, ministering spirits, guardian angels, protectors and warriors. I’d venture to say that most Christians believe they have a guardian angel watching over them, as per Jesus’ words in St. Matthew 18: “See that you do not look down on one of these little ones. For I tell you that their angels in heaven always see the face of my Father in heaven.” 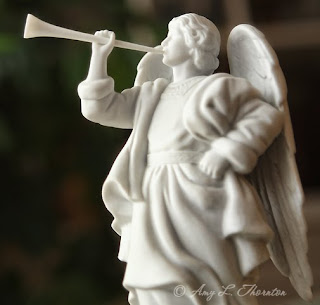 This time of year we may think of the messenger angel who appeared to the shepherds in the fields to announce the birth of the Saviour found in St. Luke 2:

“For behold I bring you good tidings of great joy, which shall be to all people. For unto you is born this day in the city of David a Saviour, which is Christ the Lord.”

The appearance of angels must be so dazzling, so mighty a presence as to invoke fear among witnesses, as they often first say, “Fear not!” before delivering their message from God.

We see so dimly on this earth. And yet, there are thousands of stories of angels intervening in the lives of mankind, from the recorded accounts in Scripture on down to our present age. Hebrews 1 tells us that angels are ministering spirits, sent forth to minister for them who shall be heirs of salvation. Do you think they know us by name? Do you believe they watch over our lives, granting comfort or protection or giving encouraging thoughts to us?

One of my favorite accounts of a ministering angel comes from Corrie Ten Boom who wrote of a remarkable experience during the horror of the Nazi Ravensbruck prison camp. She writes:

“Together we entered the terrifying building. At a table were women who took away all our possessions. Everyone had to undress completely and then go to a room where her hair was checked.

I asked a woman who was busy checking the possessions of the new arrivals if I might use the toilet. She pointed to a door, and I discovered that the convenience was nothing more than a hole in the shower room floor. Betsie [her sister] stayed close beside me all the time. Suddenly I had an inspiration, “Quick, take off your woolen underwear”, I whispered to her. I rolled it up with mine and laid the bundle in a corner with my little Bible. The spot was alive with cockroaches, but I didn’t worry about that. I felt wonderfully relieved and happy. “The Lord is busy answering our prayers, Betsie,” I whispered. “We shall not have to make the sacrifice of all our clothes.”

We hurried back to the row of women waiting to be undressed. A little later, after we had our showers and put on our shirts and shabby dresses, I hid the roll of underwear and my Bible under my dress. It did bulge out obviously through my dress; but I prayed, “Lord, cause now Thine angels to surround me; and let them not be transparent today, for the guards must not see me.” I felt perfectly at ease. Calmly I passed the guards. Everyone was checked, from the front, the sides, the back. Not a bulge escaped the eyes of the guard. The woman just in front of me had hidden a woolen vest under her dress; it was taken from her. They let me pass, for they did not see me. Betsie, right behind me, was searched.

But outside awaited another danger. On each side of the door were women who looked everyone over for a second time. They felt over the body of each one who passed. I knew they would not see me, for the angels were still surrounding me. I was not even surprised when they passed me by; but within me rose the jubilant cry, “O Lord, if Thou dost so answer prayer, I can face even Ravensbruck unafraid.” - Corrie Ten Boom 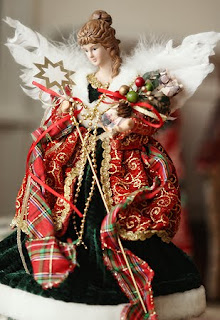 This angel is actually our tree-topper. But our Christmas tree is too tall for her this year and so she's watching over the living room from the mantle.