Because "No Child Left Behind" Doesn't Work

Education has been the topic at our home in recent weeks because we're contemplating a change of direction with regard to school.

I often have a dour outlook with regard to US public schools, due to the fact that, well, our dour test scores when compared with other nations. Just check out the PISA rankings if you're in doubt that American education is missing the mark.  Just what is going on?  or, maybe more accurately, what isn't going on in the classroom?

From my experience as a mother and from many conversations over the years with public school teachers, the essence may be summed up like so:

Teachers are limited in the classroom because of county, state and federal guidelines.  More paper-work for them means less interaction with students.

Changing curriculum.  The mandate for teachers to use new methods for teaching (when there was nothing wrong with the old way) cause frustration among teachers and students.    Some teachers I know have retired early because of this problem.

No Child Left Behind, which essentially holds the students back who learn at a faster pace.  Not presenting challenges or rewards for bright students may lead to behavior problems.

A government education system that must retain ineffective, poor teachers.  A teacher with tenure is harder to remove than flies from molasses.  Take this true account from a school near me as case in point:  An elementary teacher was doing a poor job with her class.  She worked another job and often came in late to teach.  Her students were not learning, not meeting their weekly/monthly goals.  The parents had to do extra work at home in order for their children to learn the subjects presented to them.  The principal fielded complaint after complaint about the ineptitude of this teacher.  The result?  The teacher remained because she was tenured.  She couldn't be fired because of her ineffectiveness, the parents had to fill in the gaps.

Regarding these issues and the downfall of academic excellence, C.S. Lewis comes to mind with one of his brilliant quotes, amazingly penned in the early 20th century:

“What I want to fix your attention on is the vast overall movement towards the discrediting, and finally the elimination, of every kind of human excellence -- moral, cultural, social or intellectual. And is it not pretty to notice how 'democracy' (in the incantatory sense) is now doing for us the work that was once done by the most ancient dictatorships, and by the same methods? The basic proposal of the new education is to be that dunces and idlers must not be made to feel inferior to intelligent and industrious pupils. That would be 'undemocratic.' Children who are fit to proceed may be artificially kept back, because the others would get a trauma by being left behind. The bright pupil thus remains democratically fettered to his own age group throughout his school career, and a boy who would be capable of tackling Aeschylus or Dante sits listening to his coeval's attempts to spell out A CAT SAT ON A MAT. We may reasonably hope for the virtual abolition of education when 'I'm as good as you' has fully had its way. All incentives to learn and all penalties for not learning will vanish. The few who might want to learn will be prevented; who are they to overtop their fellows? And anyway, the teachers -- or should I say nurses? -- will be far too busy reassuring the dunces and patting them on the back to waste any time on real teaching. We shall no longer have to plan and toil to spread imperturbable conceit and incurable ignorance among men.”  -C.S. Lewis

It's where we are in America, but thankfully, I feel like the tide may be turning thanks to a phenomenal human being: Salman Khan.

My whole point in writing this today is to introduce him to you if you aren't familiar already.  He is an educator, a visionary and a remarkably down-to-earth and highly intelligent man.  He is the creator of Khan Academy, what I bill as the greatest thing ever made available on the internet-  Period. 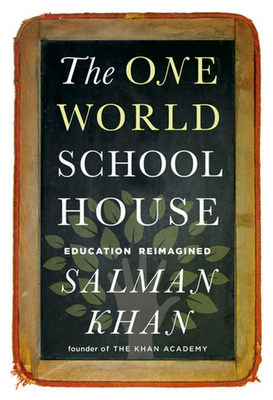 Mr. Khan's vision is to provide a world-class education to anyone who desires it for free.  He has a new book out, titled, The One World School House, expressing his views on education and turning the current model on its head.

You can also hear for yourself, in this brief interview with Sal Khan, his view on education  and what really works.

Salman Khan has made a believer out of me!  We've been using the videos from Khan Academy since May of this year to build math skills in our 6th grader and to ignite our 9th grader's passion for higher math. I've even surprised myself by becoming engaged in videos on physics and linear algebra... who knew a brief intro on matricies could be so interesting and easy to follow?

Keep up the great work Salman Khan and all those who make Khan Academy available.  May you continue unhindered on your awesome mission.

I got a job in public education a year ago and it is politicized money grabbing based on artificial benchmarks of competence of the students and teachers. I'm a HUGE fan of Khan Academy. Education can happen if the government will get its hands off of it.

Government? Has been talking for 40 years or more about the need to improve American education.

Rather like the way they've been yapping about "reducing our dependency upon foreign oil."

I'm so glad to have found this post -- I hadn't heard of Kahn Academy, but it reminds me of what John Holt espoused so long ago: a society in which everyone freely shares their knowledge and skills with anyone who wants to learn.

I know it's not like that in the public schools, where the teachers are not usually expert in their subject matter. E.g., the high school English teacher is not a gifted writer, the physics teacher is not an inventor. But also, from what I hear, the teachers are usually unwilling to share good resources and tips with other teachers, because if they are having success in the classroom they want to win the prize for Best Teacher or have their students score the highest on the standardized tests.

I know this is a bit of a tangent, but the FREE part of Kahn's vision is so inspiring and encouraging to me. Thank you for sharing!

Good article and great quote from Lewis. The "governmentization" of school is one of the most potent engines of degrading our whole civilization to the lowest common denominator. Bro. Steve

I also wondering if the dumbing-down of America is related to the break-up of most families. Single parents just don't have the time to invest in helping with homework or doing activities that build creativity and skills rather than watching TV or playing computer games or what have you. Also, children from broken homes have more pyschological and emotional issues, and the teachers are stuck dealing with those during class rather than teaching. I have heard about this from many of my friends who worked or work in public education.

Yes, I agree that the breakdown of the family contributes to the dumbing down of America..as well as the spiritual undercurrent of the nation.