Hero of the Faith

Even though it’s been nearly seven years since I became Orthodox, I still receive curious glances from people when asked where I attend church.  Probably stranger still is the incredulity seen (from non-Orthodox) when I talk about Russia and the treasure trove of spirituality to be found there.
There seems to be a belief  -if indeed anyone thinks about it at all-  that Russia is yet full of atheists, political propaganda and that if Christianity exists there at all, it must be because of American missionaries sharing the Gospel of Christ.  I don’t disparage missionaries to Russia necessarily.  I just think that, sadly, some of them haven’t a clue about Russia’s rich cultural heritage, of the saints and martyrs this land holds.  We need more missionaries from Russia to come here, to the United States.  A land untested by such fire.
The fact is, Russia has been a Christian land longer than America has been a nation. Much longer.  Christianity came to Kievan Rus in the 10th century via glorious Byzantium; a spreading of the Light just as Constantinople became that beacon after the fall of the western Roman Empire.  Looking at history in this way, one can see the amazing hand of God at work through those who love Him.  One may argue that it is thanks to Christian Russia that North America became subject to this great Light, by way of the saints traveling from Russia to what is now Alaska.   Praise God for St. Innocent and St. Herman! †
Christian Russia continues to bear witness to the great Light of Christ; we have to look no further back, for one example, to the mid twentieth century.  I want to share one of those Light-Bearers with you, as I learned his story from Archimandrite Tikhon in his excellent book, Everyday Saints and Other Stories.
His name was Ivan Mikhailovich Voronov.  He was a decorated WWII veteran, having served for four years as a soldier on the front lines against German aggression (yes, if you’re born after 1990, did you know that Russia was an ally of the United States during WWII ?)  He told the story of being in the midst of that German fire and hellish chaos and promising God that if he survived, he would dedicate the rest of his life to God and retire to the monastery.  In his words: 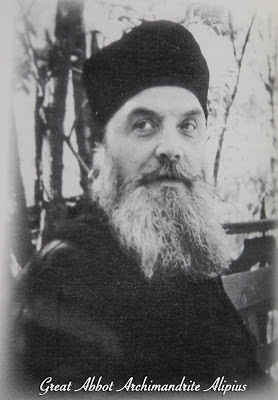 “Imagine the German tanks charging our front lines, their machine guns firing, cannon shells blazing, just cutting us down, sweeping away almost everyone in their path, and suddenly in the midst of this utter hell I saw how our battlefield commissar tore off his helmet, even as the bullets were flying around him, and fell to his knees, and began to pray... yes, indeed, somehow this ‘Communist’ was able to mutter the half-forgotten words of the prayers he used to know as a child, begging the Almighty to spare us.  And He did.  That’s when I realized:  God lives inside all of us, and one day He will make his appearance to us, some way or other...”
Ivan Mikhailovich kept his promise and after the war, after serving those years in the Red Army, he went on to become the Great Abbot of the Pskov Caves Monastery, one of only two monasteries in all of Russia that continued to operate under Soviet repression.  With the same fervor that Ivan had demonstrated on the battlefield, he next brought to the defense of a beacon of Light in a darkened land. Ivan Makhailovich Voronov became Father Alipius, as is the custom in the Orthodox Church to take on a new name when entering monasticism and the priesthood.

Fr. Alipius, for 13 years, defended the monastery against the same regime he had given his blood for.  And he did so with such tenacity, such wit and strength that one can only conclude God blessed him to meet the challenges of his day.
By those who knew him best, he was described as:

“a fearless spiritual warrior and the ideal of a demanding and yet loving father.”
“brilliant and often biting wit”
“governed by conscience alone”

As I read his story I couldn’t help but think of the crusty old men I have been blessed to know who were WWII vets.  Men who somehow, by the grace of God, were able to retain gentle loving hearts even though their lives had borne witness to some of the greatest horrors of mankind.  Men who had a fierce love of America, their fellow man AND God, having gone down into the pits to wrestle demons most of us can’t even imagine.
Fr. Alipius was practical, earthy... a man’s man.  He obviously had no fear of the Soviet state, even if during his lifetime he witnessed the widespread destruction of both churches and monasteries.  He knew priests and other men & women who came under arrest because of their belief in God, an “enemy to the state”.  Year after year he fought with intelligence and wit to keep the monastery alive and protect his monks, over half of whom were highly decorated veterans of WWII.  Others had survived Stalin’s camps.  These were not weak men.
A recorded eye-witness account tells of how, “on one winter evening several men in plain clothes marched into the office of Father Alipius and handed him an official command:  the Pechory Monastery near Pskov was officially closed.  The abbot was hereby commanded to so inform the personnel of the monastery.  Having read the document, Father Alipius tossed the paper into a blazing fire right before the very eyes of these officers.
To the astonishment of his visitors he calmly declared: “I am willing to undergo martyrdom and death by torture if it comes to that, but I will never close the monastery.”
The paper that he had just cast into the fire was an official decree of the government of the USSR, and had been signed by Nikita Khrushchev himself.”

Fr. Alipius ruled by conscience alone, as God gave him direction and discernment.  His example is one of many that boasts the spiritual depth of a people that have been tested through fires America cannot fathom.  He is a hero of Russia, certainly, but so much more, a hero to Christendom.  Thank you Father Alipius.

May his memory be eternal
†

I encourage you to get the book to read the rest of Fr. Alipius' amazing story plus many more inspiring people of faith.  Proceeds from this book go toward building a cathedral in Moscow to commemorate the victims of communist repression in Russia.
Posted by amy at Friday, February 01, 2013

Thank you for reading, Sasha! God's Blessings to you †

Inspiring! And thanks for the great book recommendation. I need to get that one.