Miraculous in the Common 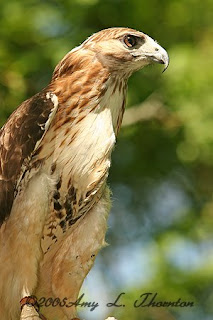 Some of the most beautiful lessons are taught by God’s creation; the endless wonders of the animal kingdom.

As we walked down the steps we could see a crowd had already gathered;  I was glad we came early to snag  seats up front.  I had brought my visiting sister-in-law and niece to Hawk’s Nest State Park to attend a free educational program on raptors.

Ron & Wendy Perrone of Three Rivers Avian Center spend many hours each year in classrooms, state parks, colleges, and camps to educate the public about our fine feathered friends and natural history in WV.

Their avian center offers vet care and physical rehabilitation to injured non-game wild birds.  Their goal is always to treat and release the bird back to its natural home, however this isn’t always possible due to the severity of the injury.  For these birds, they often become part of the educational program.  Nick, a Red Tailed Hawk, is one such bird.

As the cameras flashed and kids sat up in their chairs to gain a better view of the hawk, Ron walked about the room with Nick sitting quietly upon his arm.  She seemed so at ease with the routine and even comforted by Ron’s gentle voice.  She’s been with their program since 1993 and is one of their most beloved companions.  After he told her story, I can understand why.

Nick’s left wing suffered a gunshot wound and was injured beyond repair during her youth.  As Ron spoke about her hardships in the early years, my heart was touched at her will to survive.  Life is tough for a bird with one wing, but love overcomes hardships.  It is thanks to some very gracious human beings that Nick is now 17 years old and fulfilling multiple purposes, such as teaching others about the beauty and strength of birds of prey and, surprisingly, illustrating a gentle selfless devotion.

As it turns out, Nick is an excellent surrogate mother.  As Ron told several stories of her nurturing instincts toward orphaned chicks, I spotted a growing admiration in the eyes of the women sitting near me.  Ron said, “When we have babies come into the center, we check them out and then put them in [the enclosure] with Nick and she does the rest.”    She has even nurtured infertile eggs for weeks, plucking out her breast feathers so that her exposed flesh would keep the eggs warm.

She responds to the instinct God gave her - selflessly willing to take babies under her wing and teach them what it means to be a bird.   Here is a purposeful life that helps to raise life to heights that she will never see.

Praise God for every living thing

Praise God for the soft fall of hooves in the forest

Praise God for the cry of the hawks circling in air

Praise God for the friendly nickers in the barn

Praise God for furry friends at my feet.

Praise Him in whose hand is the breath of all living things.

*Pictured is Nick from my 2005 visit to the Avian Center for a photography workshop.