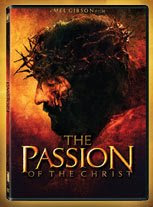 Just recently my friend, Effie, brought two interviews with Jim Caviezel to my attention that I am posting below.  I can’t say that I’m a fan of Mel Gibson’s “The Passion of the Christ” because I’ve never seen it.  I think that may have to change after watching the interviews with Jim, who portayed Jesus Christ in the film.

As with most media sensations,  whether book or film, I tend to shy away until the dust settles and I can clearly see what is before me.  With  church groups going to see this film en masse, the reviews and chatter about “The Passion” were something that I could not avoid in my crowd.  At one point, I had agreed to see it in order to participate in a subsequent discussion.  But when it came down to the night, I backed out and here’s why:  fear.

I fear that the brutal images of Christ’s crucifixion will haunt my thoughts...  I know of His sacrifice for me, do I need to watch it portrayed in film to have that message  bonded to my soul?

As I was talking to another friend about this only a few days ago, I wonder....if I had lived in Christ’s time, when He walked upon the earth, would I have stayed to be with Him in those dark hours or would I run away?    I believe I would run....  as fast as my feet could carry me to some distant hill where I could not hear the cries, the taunts, the brutality, the mockery.  I think I would cry alone, sheltered from the terror of Golgotha.  How can we who love Him bear to witness such violence against Him?

After listening to Jim’s words and how this film affected his life, I am rethinking my earlier decision.  Jim says in the first interview, “...yes, the film is controversial, yes Jesus Christ is controversial and they killed him for it...”  He speaks with such conviction that I do not doubt the transformation he describes during the making of “The Passion”.  And this excerpt in particular held my attention because of its sincerity and clarity.  When I speak with people about religion or doctrine, how the church is changing... it always comes down to this:  Christ said, “I am the way the truth and the life, no one comes to the Father except through me.”  St. John 14:6   It’s an exclusive statement that challenges the notion of inclusiveness and tolerance that represents the emerging “christianity” of our modern society.

Kudos to Jim Caviezel for speaking so honestly and with humility and to Mel Gibson for creating a work that was a labor of love and deep conviction.  I’ll have to blog again IF I have the courage to watch the movie.  Thanks, Penny, for your thoughts and insights on this!

Email ThisBlogThis!Share to TwitterShare to FacebookShare to Pinterest
Labels: Christianity, Jim Caviezel, Mel Gibson, St. John 14:6, the passion, The Passion of the Christ