As the leaves fall and the fog swiftly rolls down the Gauley River most mornings, I feel blessed to live in this neck of the woods.  Very often, as I take the kids to school, we are greeted by the morning sun playing peek-a-boo through thick blankets of mist above the confluence of the New and Gauley Rivers.  And, every morning for the past two years, I’ve been on the look out for blue herons.

Autumn typically brings migratory birds through our area on their long journeys south.  One December day in 2004 I spent nearly an hour photographing a large flock of Ring-billed gulls playfully darting through the air and then resting on the quiet river.  Those large white gulls brought a highlight to an otherwise bleak and gray winter day.

Recently the kids and I have spotted a Whistling Swan on the Kanawha River.  We’ve seen her every day for the last 2 weeks; apparently she’s found a prime feeding spot.  Whistling swans usually make an appearance  this time of year, but it’s unusual to see only one since they migrate in flocks.  Whatever her story is, she seems quite content to swim and feed alone.  In the evenings sometimes we’ll see her with the resident flock of Canada geese.

It was on November 3rd this year that I finally had the opportunity to photograph a blue heron!  I’ve been “chasing” these birds ever since I first noticed them stalking frogs and fish along the New River near Beckwith.  I’ve been out time and again with my camera but usually leave in disappointment as I watch it fly away or move to an area just out of reach.  I’ve had to laugh at myself in all the failed attempts; being out of breath with a heavy backpack strapped on, fumbling to grab the right lens and then to watch the heron gracefully fly away, deciding that the fishin’s better half mile downriver.

I’ve developed a great admiration for wildlife photographers; they are among the most patient people in the world, waiting hours, days or even weeks in secluded areas behind blinds to capture a raw view of God’s creation. 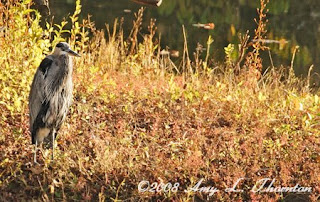 "Grab your coats; let's go!!" I shouted to the kids on that Monday afternoon.  They think I’m nuts to chase after the herons, but I told them it would be time well spent.  It was.   For roughly 40 minutes, my son enjoyed the fishing on the opposite bank from the blue heron while my daughter and I hiked about 80 yards down river in order to sit and photograph this thoughtful bird.   I guess we were still far enough away not to cause a disturbance, probably 50-60 yards, because he didn’t seem to move for the longest time.

I snapped frame after frame, thanking God for the opportunity in between.  The sun felt warm on our faces in spite of the cool fall air and I realized too, how good - how important- it is to be still and behold God’s creation. 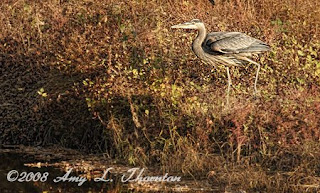 These golden moments are epiphanies of the eternal.  Thank you, Lord, for every living thing, for Your light in this world, for moments to be still and know that You are God!