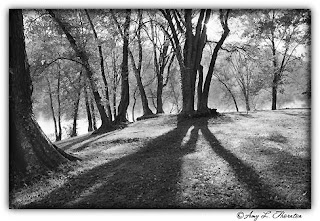 There is an outdoor place I go to pray where the atmosphere is different; it’s marked by a peace that is palpable. I don’t have the opportunity to visit daily, but I try to go there at least once a month because it provides such a nearness of God’s presence. It’s a thin place, in the sense of the Celtic peoples who describe such places in ancient Ireland and Scotland. A place where the veil between the heavenly and earthly realms is very thin and transparent. In looking for others with similar experiences, I found a thought-provoking article by Mindie Burgoyne you might also enjoy.

A few of my friends know what I’m speaking of when I mention thin places, each has their own description for such areas...”the energy is different”, or “the atmosphere is charged” and I have found it fascinating to hear about their own locales and experiences. Some of the monks at Holy Cross Monastery have told me about visiting the graves of saints, sometimes in ancient catacombs, where it was difficult to speak because there was such an overpowering presence of God. In each case, we all have a difficult time describing such places because they seem to be perceived outside of our five senses. It's almost easier to gain a sense of understanding by beholding the face of the witness rather than absorbing their words.

I asked the abbot of the monastery what he thought about “thin places” and he was quick to remind me that while there are holy places on the earth where we come into contact with God and His saints there are also “thin places” where we come into contact with spirits that are not from God, but from the evil one. He cautioned that I should be wise about discerning these places.

I thought of the abbot recently, as I visited Cass, WV for a photography workshop. While the workshop exceeded my expectations in affording dramatic images of the rare Shay engines and surrounding rugged West Virginia landscape, I learned that the community of Cass (population 16) transforms into something altogether different when the tourists have gone home for the night and the train depot is silent. The atmosphere was so dense and disturbing that my friend & I cancelled our reservation to stay in the immediate area and lodged 11 miles away instead. Pictured below is the old Cass Company Store. More on Cass later... 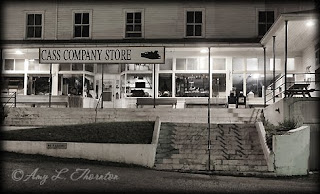 I visit an aunt in New Orleans often and the French Quarter is a curious mix of tourist junk and darkness. I remember during one walk that we wandered into the garden behind the St. Louis Cathedral. The trees were slowly shedding their yellow leaves and it was a bright, sunny day with a cool breeze. There is a statue of Christ out back with his arms raised. The silence and the peace in that garden was such a contrast with the surrounding area (literally just feet away on the other side of the fence), that I think it made me notice how dark the rest of the French Quarter was.

So good to see you blogging again! I know what you mean about special places. I've had some experiences. A friend of mine had an experience of the negative type in New Orleans. His description is truly terrifying - and my friend is not someone who is particularly religious.

Thanks for the comments, ladies! It's nice to be back here again; I'm always trying to strike a balance between family, work and "me time" =-) Some months work better than others it seems.

Thanks, too, for sharing your own experiences...Deb, I'd love to hear more, or of you've blogged about this already, point the way!

Nicole, I've never been to New Orleans, but from reading only, could see how places around the city would be spiritually dark. What a vivid contrast you describe.

My balcony is sometimes such a "thin place" where peace is easily found. It's not a remarkable place in any sense, but I have a comfortable old chair there and some flowers. I'm very fond of it and sit there far to seldom. / Helena

This is the place Nicole mentioned. The falling leaves, alas, did not really show up in the shot.

Fascinating post, Amy. I have found parts of Key West to have that negative sense and feeling about them, and even parts of Big Pine Key and No Name Key, but each having its own unique sense of dread. Big Pine and No Name (?) have been the sites of Manson-like murders. Key West is full of partying and debauchery. Sound like New Orleans a bit? Another small town in Florida called Cassadega, a spiritualist and medium community, also has a negative spiritual temperature. You just feel uncomfortable and edgy being there.

And on the other hand, there is a local church that has a prayer garden that is one of those tranquil, thin places.

Interesting how many of us have similar experiences with places.

My husband feels that there are evil spirits, that under the right conditions, have authority over cities and places. He teaches that passages like Daniel Ch. 10 go along with that concept, as well as the letters to the churches (and their corresponding cities) in Revelation.

Helena, how nice of you to visit my blog! It's good to read your comments and know that you are well. Please come back again =-)

E.B., thanks for sharing your experiences! It's always a blessing to know kindred-minds.

Fr. Andrew, thanks for passing along the photo.

I have not heard the term "thin places" before, but I definitely understand the term, and have used a similar expression to describe moments when the veil was drawn back before my eyes and I felt I saw something of the Heavenly realm. Being of Irish descent, I am interested to know it is a Celtic expression!

I also believe I have experienced the other, less lovely, experiences of a darker world. Your post is very thought provoking and I am glad I discovered it today. Be well.