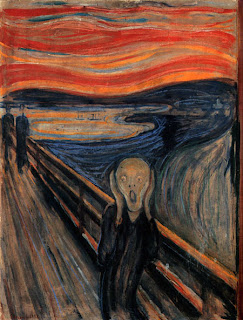 It’s not I, but my hero and champion of words, J.R.R. Tolkien who gave the concept to me. Despair is not so much a state of emotion, a theological conundrum, as it is a mistake, for who can see all ends?

Despair is the absence of hope, the annihilation of peace, located at the center of chaos. It is a primary weapon of our enemy, employed to dismantle christians of our faith in a loving God and non-believers of their trust in the goodness of humanity. It's a weapon in which the enemy measures success by death. I’ve known several wonderful people who have been ravaged by despair and sadly, some who have taken their life because of it.

Recognizing how this weapon is used is our first means of defense against it. We have power in the name of Jesus Christ in rebuking satan, power in prayer and fasting, in confession, reading His Word and the strength of the believing community, the church militant & triumphant. These are our weapons to engage in this spiritual warfare. I understand there is a place for helpful medication, for counseling, but very often the medical community overlooks the needs of the spirit.

I read the story of Tyler Clementi today, the New Jersey college student who took his life because of the despair he must have felt when his privacy was broadcast to anonymous millions via the internet. The weight of such humiliation too great to bear. I hope the student(s) responsible for this despicable plot receive the maximum penalty under the law, for they obviously have no idea what human dignity is.

In the AP article, referring to Rutgers University, known for ruthless behavior in other areas said this:

“...students, faculty and other employees have been encouraged to attend a series of lectures, presentations and discussions on civility, exploring such topics as how cell phones, iPods and other gadgets affect civility, and sportsmanship for athletes and fans.”

Presentations on civility. Did you catch that?!

This brings me round to my next point --I didn’t have to read far to learn that the Gay Rights Advocates have called this a “hate crime” and will, no doubt, use this as a call to action, to further their agenda. Wait a minute... “hate crime” ? do you have to belong to a special group to use this term? What about.. oh, I don’t know...

a crime against humanity?

Can we call a spade a spade and agree that destroying a person’s mind & spirit by invading their privacy and humiliating them in front of the world is an act of a person without conscience? No mercy and no conscience...

...it’s an indicator crime that affects us all as human beings created by God, no matter our feelings about homosexuality. It's an assault on human dignity, an evidence of barbarians in our "civilized" modern age.

Lord, have mercy, to make straight our crooked lines.

*Painting is "The Scream", by Edvard Munch

I think it's a mistake to call it a hate crime as well. The message could be construed to mean it might be okay if Tyler had been taped with a girl.

It was never right under *any* circumstances. It was an act of hateful bullying. You've said it right - it was a crime against humanity.

But, I do have to say that my heart goes out to those foolish, foolish students who did this. They will have to live the rest of their lives knowing that they destroyed a life.

Presentations on civility? Amazing. But not surprising. I am back at ‘school’ at I guess what you call a community college after nearly 30 years out of education and I am constantly appalled by behaviour. Everyone bawls all the time about their right to their opinion - they have no idea of ‘time and place’, no notion that what is appropriate in one situation is not in another, no idea that sometimes the best thing is to be quiet, they feel slighted and wronged if they can’t roar their opinion whenever they want and the very suggestion that there are situations where their opinion is irrelevant produces panic, anger and confusion. The Communications teacher spent half an hour trying to explain the idea of a summary and for about 25 minutes all they could say was, “But if it’s not about my opinion, what’s the point? I don’t see the point if it’s not about what I think about it.” I’m 46 and I’ve “been around” but I’ve never come across the levels of self-centeredness that I have amongst the 16-25 age group in this college. I know not all kids are like this but it seems a massive number of them have been brought up with no consideration for anyone else - life is a movie staring THEM and that’s all - they have no detectable empathy whatsoever. It’s blood chilling.

"No detectable empathy" -- you said it, Margaret. It's disheartening to know this is your experience. All the more reason to encourage those in this young generation who DO exhibit honor, patience and love for their neighbor.

Deb, thanks for saying that, as I needed to hear it -- you're right, these foolish students have quite a weight to live with. I wasn't even thinking of that...

My sense of justice blinds my own compassion...Lord, have mercy on me.

This is one of the best blogs/posts I've read in regards to this tragedy and I wonder too if we are missing the point by calling it a Hate Crime.

Great post thank you for your words, they ring true.

Thanks, Gabriella, for the positive feedback; it's always nice to hear from you!

I think there is a "disconnection" where people; and these kids in particular, don't see the reality of their actions, but are somehow "once removed" from it- like watching a movie of someone elses life- and having no more regard for the cast of charactors playing in it than the fiction they see on TV.
there is one thing that hasn't been mentioned however, (I always seem to have a "what if" moment when thinking about these things)
"What if" these kids will now see the result of their actions, and become a voice for change? will we help them? or will we rush to condem and disgard the lesson they have put into play as a tragedy and nothing more than a *blip* on decent society?( and it TRUELY is a tragedy- make no mistake )
IF they had no spiritual Compass to allow them to make such a misjudgement of consequence, who will guide them now? Think about that for a moment.....

and maybe this goes even deeper. how many of us have found someone elses weakness, or even a moment of weakness, in another and becasue it shocked us, or suited OUR needs- exploited it or drew attention to it- to take the focus off of our own shortcomings?

The moment that the video was streamed- I'm sure that those responsible didn't quite see what they were doing would harm anyone else- but in the end is did.
I've also heard people saying " there should be a law against this sort of behavior!"
In a very real sense, there already has been....read on.....

Would another law made of man have made a difference? no- I don't think so; because it would just another law among many that would be ignored when the ability to be somewhat anonymous makes us bold.
But if these chldren( young adults, whatever....) were heeding Gods words "Do unto others, as you'd have them do unto you....." or they had even taught those edicts to be a part of THEIR charactor,- which one do YOU think would have had a better chance of adverting this tragedy?....
Yes, there has been a great wrong done here, but I think it started long before the action....

Great thoughts, Clayton. You always bring a new perspective and I appreciate that.

"but are somehow "once removed" from it- like watching a movie of someone elses life- and having no more regard for the cast of charactors playing in it than the fiction they see on TV."

I completely agree. ..and, unfortunately, I think this mentality is all too common in our young generation.

I hope you're right...and there is a turning for these students who carried this out - St. Paul was a persecutor of christians and then became one of the loudest voices for Christ.

"and maybe this goes even deeper. how many of us have found someone elses weakness, or even a moment of weakness, in another and becasue it shocked us, or suited OUR needs- exploited it or drew attention to it- to take the focus off of our own shortcomings?"

...guilty. I don't think I do this intentionally, that is, to draw attention away from my own shortcomings, but that certainly happens, even if on a subconscious level. It's the meantality that says, "I can't believe such action.... *I* would never do such a thing..and then believe someone else's sin is worse than my own, thus making myself feel "better" than someone else.