She would be celebrating her 27th birthday this month; it's hard to believe it's been so many years since her death as I can still recall our memories so clearly ..and dearly.
Kim became my "Little Sis" when I volunteered to be a friend/mentor to underprivileged and at-risk children.  I am republishing a tribute I wrote in 2002 to keep her beautiful memory alive:

In Memory of Kimberly Dawn Agent

She was only 11 years old when I met her through the social service program.  Tall but petite with blonde, disheveled hair and a gleam in her deep brown eyes, I liked her right away.   She was gaining a “Big Sis”; I was gaining a new young friend.

One of my most vivid memories of her was from early summer, when she had just finished school.  I picked her up, and headed for Charleston, to have a picnic on the Capitol lawn.  She was giddy at seeing the lush manicured grass and feeling its softness on the bottoms of her feet.  She was gaining a glimpse at another world; I was gaining insight into her world.

We went many places together: museums, hikes in the woods, horseback riding, church, restaurants and such.  She seemed to enjoy everything we did….especially horseback riding.  I gave her riding lessons on my horse, Jack, and her face glowed when she could handle the reins all by herself.  She was gaining a sense of self-worth, I was gaining memories I’ll never forget.

A year later, at my wedding, her presence was warm and charming.  Her new dress fit to a “T” and she allowed me to fix her hair in an upsweep style that complemented her growth into a young lady.  She gained much adoration from kind strangers that evening; I gained a beautiful photograph of her that I cherish to this day.

It saddens me still that soon after my wedding and subsequent move, and her placement in a foster home, that our communication became less frequent.  I phoned her occasionally and sent letters too, but her successive moves made it difficult to stay in touch.  She was gaining a more frightening reality; I was oblivious to it.

For the next year and a half communication had nearly stopped and I missed her.  I thought of her beautiful smile often and prayed she was being cared for by loving hands.  And then it came.

A call in the middle of the night startled me awake, with her sweet voice on the other end.  I had known from her social worker that she had run away again from the foster family, or community shelter who had assumed responsibility for her.  I also guessed she was probably with some older kids.

She called me, she said, because they needed shelter and a place to “lay low” from the cops.  She added that she trusted me and loved me, so felt safe to call on my help.

I will always wonder how I should have handled that call……in the end, I kept her on the phone as long as I could, trying to get her location and offering to help, but telling her I would have to let the authorities know.  That information was met with silence.

At length, she finally said that they had to keep moving…and that she loved me.  I told her I loved her too.

Trembling fingers dialed the State Police next to report everything Kim had revealed to me.  She was found in a neighboring state within the week.  After that episode, I vowed to re-establish our friendship…even if it meant long road-trips to see her.  I had been preoccupied with married life; she was just trying to survive.

Over the next many months, I did stay abreast of her whereabouts.  She was staying at a community center for troubled youths when I finally got to see her again.

I had arranged a visit, an off-campus visit, with her for an afternoon.  I knew exactly where I would take her- Grand View, State Park.  It was near to her “home”, and provided an excellent opportunity to enjoy the outdoors.

I remember that I brought her a gift of gumballs, one of those pint-sized canning jars filled with various colored gumballs.  It was such an inadequate gift.  We hugged each other and she climbed into my truck for our outing.

We talked for a long time that afternoon and she revealed so much to me, more than she ever had before.  Her mother had been imprisoned in connection with a murder and Kim had visited her a few times.  She said she hated it and she didn’t know her mom anymore, and that she never wanted to go back.  She told me lots of things that afternoon; why her hair had always smelled of cigarettes and alcohol when I picked her up, why she ran away, how she felt about the world.  Such heavy burdens for a 12 year old I thought.  My heart hurt for her.

We were allowed several hours together that afternoon, and I am so thankful for it, as it was the last time I saw her alive.  Before I returned her to the shelter that day, she wanted to tell me about a dream she had:  She was running through the woods, looking for a white house.  When at last she found it, she stepped up to the porch where an older lady told her to come inside.  She entered the door to see a large screen before her.  On it, she watched the events of her life play out…..all the wickedness, the loneliness, the abuse, the confusion,…..and then, a soft, warm, loving angel appeared to her and told her she wasn’t to live this way any longer.  Kim told me that when she awoke from this dream, she was staring at herself in the mirror.

I didn’t hesitate to tell her that she probably did see a real angel, as God does send his angels and ministering spirits (Hebrews 1:14, and Matthew 18:10) to aid His children.   There were a few wonderful moments of silence between us then….quietly thinking about what the other had said.  She was thinking about death; I was astounded at hearing about a miracle.

The telling of the dream led to a conversation about Jesus.  Kim was wearing many cross emblems that day, the latest fad.  I asked her if she knew what they symbolized, and when she indicated that she didn’t really understand, I told her about Christ, and what He had accomplished while walking on this earth.

She listened……for a long time.  I will always thank God for that afternoon with this precious child.  I have learned that it was a gift; a social worker later told me that “by the book”, I should have never been afforded an off-campus visit with her.  After all, she had a record of running away at any chance.

A few months after our visit, I learned that Kim had been missing for several days.  It turned into weeks and finally, at the dismal end, her remains were discovered near to the place she grew up….in the woods.

At the funeral, I am ashamed to admit that I was consumed with anger rather than quietly celebrating the life of this young girl.  She was dancing with angels; I was picturing her mother burning in hell.

I think I’ll always chastise myself that I didn’t do enough for her…that I was too immature at the time to help her plight.  She was a precious gift to her parents, a gift squandered and left to the winds.  I am thankful I knew her; that she so willingly returned the love and joy I gave to her…..tenfold.

She is home with the Father; I am here to celebrate her life and share the treasures with you.

May her precious memory be eternal. 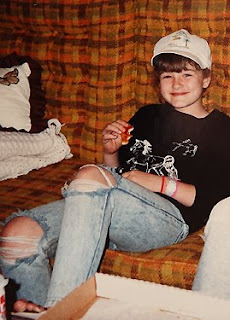 thank you for sharing this.

Thank you for sharing that. Beautufully written.

You ladies are beautiful souls ...thanks for reading.

Memory eternal. May she rest with the righteous.

Thanks for that, Amy.

May her memory be eternal.