It’s been a beautiful weekend spent with one of my dearest friends.  During the course of our visit, we had several discussions lamenting the path this country is on toward socialism (some would argue we’re already there) and how the flawed mentality of “entitlement” and “fairness” is destroying our society.   I think you can discover a microcosm of this attitude in many businesses, I know I certainly did in my years with the healthcare industry.

It’s the lunchroom chatter complaining about the “unfairness” of the boss, the long 8 hour workday, the mundane tasks to be performed day after day, month after month and year after year.  Rarely did I encounter gracious attitudes thankful for a job, the means to save and pursue other interests or lauding a boss who not only pays them on time, but grants vacation pay, healthcare and other benefits.  This dour outlook is so infectious that to oppose it is frequently to be found in a silent minority.  I find this same caustic disposition at the heart of an ailing America.

As a small business owner, I cannot overstate my gratitude to live in a place where I have the freedom to grow, to expand and yes, to make profits.  One of the greatest assets in earning money is to have the authority to give it away.  There is satisfaction in having the power to choose who I want to help when I know so many of my tax dollars go to programs that I do not endorse.

If more folks knew the joy of giving of their profits to charities, they would understand a vital motivation for some us entrepreneurs in this capitalist society.  Perhaps even a purpose for their God-given talents and skills.

A few favorite quotes on socialism...

"To take from one, because it is thought that his own industry and that of his fathers has acquired too much, in order to spare others, who, or whose fathers have not exercised equal industry and skill, is to violate arbitrarily the first principle of association, 'the guarantee to every one of a free exercise of his industry, and the fruits acquired by it.'"
-- Thomas Jefferson

"Of all tyrannies, a tyranny exercised for the good of its victims may be the most oppressive. It may be better to live under robber barons than under omnipotent moral busybodies. The robber baron's cruelty may sometimes sleep, his cupidity may at some point be satiated; but those who torment us for our own good will torment us without end, for they do so with the approval of their own conscience."
-- C.S. Lewis

And, a poignant political cartoon by D.T. Devareaux shared by my friends.  This was found in an AUSTRALIAN newspaper, seems as though our friends Down Under have an acute understanding of our societal ills. 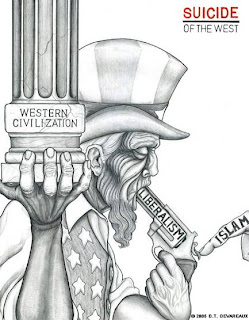