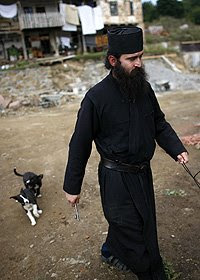 Thanks to Joseph Patterson at Mind in the Heart, I have discovered this inspiring story.  Everyday we’re reading headlines about the economic crisis in America and now, around the globe.  As a supporter of President Bush, I was left scratching my head when he called for an immediate bailout plan for Wall Street.   Why can’t the market just correct itself?   It didn’t seem like wisdom to cover the losses of mortgage companies who made poor financial decisions, but then, it’s a complex issue and I probably don’t have enough knowledge of the intricacies to make a judgment call one way or the other.

Hristo Mishkov, 32, has some interesting insights to share about the market and the American dream of pursuing happiness being a former Nasdaq broker.   He was successful in his trade, remarkable enough considering his childhood in Bulgaria under communism.  But his material wealth did not bring happiness and so, five years ago he left New York and returned to Bulgaria, calling a dilapidated monastery and former communist labor camp, home.

Although Brother Nikanor, as Mishkov is now called, says “It is right to see people who consume more than they deserve shattered by a financial crisis from time to time, to suffer so that they can become more reasonable” he also acknowledges an admiration for the wealthy such as Bill Gates who give generously for the good of society.

His advice to former colleagues is to place a jar of soil on their desk to remind them where we are all heading and what matters in life.  “Milk is not produced by computers, bread doesn’t come from a good company PR.  It is necessary to plough, sow and harvest before that.” says the monk.