Beacons: Hope in the World 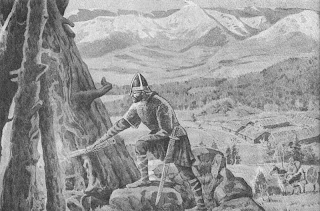 I’ve found myself in multiple conversations lately regarding monasticism. Honestly, it’s been a recurring theme ever since I converted to Orthodoxy in 2006. It seems as though much of the Protestant world, and those who claim no religion at all, frequently misunderstand the nature of this high calling of God.

The misconceptions include but are not limited to the following:

-monks think they can earn their salvation by their “works”

-monks abandon their service to the world to pursue selfish aims

-monks are “wasting” their lives

-monks are “out of touch” with the problems of the world

These claims could not be further from the truth.

Monastics are our beacons in this dark world, they give hope to the world by shining the Light of Christ most brilliantly.

* Monastics understand the violent corrupting nature of sin better than most of us lay persons because they enter into spiritual warfare daily.

* Monastics understand the power of prayer and diligently, daily pray for the world as well as individuals.

* Monasteries become centers of hope and illumination for communities; this is why many towns and cities built up around monasteries from days of old.

* Monastics, by example of their lives, give testimony to Jesus Christ and His enduring love for mankind.

* Monastics do not believe they “earn” salvation by works, but believe in the mercy of God for their salvation.

* Monasteries, and the holy people living within them, with the grace of God, transform places into holy ground.

* The number of active monasteries is a good indicator of a nation’s spiritual health.

* Monastics provide spiritual help and guidance to those in need; contrary to popular Protestant belief, they are most accessible and hospitable to those seeking Jesus Christ.

* Monks know the value of being still, ...a much needed lesson for us busy Americans.

Our Orthodox Monasteries around the world are holy places, daily engaging of the worship of God, providing spiritual direction, prayer & contemplation, healing, caring for and venerating precious icons, teaching us to be obedient in our life in Christ... they are our beacons of Light in this world.

Pray for our monastics,

Thank God for those answering this high calling...

Incidentally, one of my favorite scenes from the Lord of the Rings is the lighting of the beacons. I cannot watch this apart from tears because it so well represents the hope, the sustaining hope of Jesus Christ, lit in this world by monastics.

While discussions on this subject haven't been that frequent, you are so right that it is usually completely misunderstood. Usually, I find most people assume #2. I appreciate what you have written. HOpefully, I'll be better prepared next time.

Amen! I do pray for our monasteries, and am so thankful for them. In the words of St. John Climacus, "A monastery is heaven on earth."