...than this, that a man lay down his life for his friends." St. John, the beloved disciple recorded these words of Jesus Christ, the 13th verse of chapter 15. Lt. Michael P. Murphy was such a man as this, sacrificing himself for his friends. Praise God for the courage and calm he gave to this man. A man who, even in his youth, was fighting bullies and protecting those who were defenseless. A man who died probably because of his mercy to those sheep herders in the mountains of Afghanistan...the ones who let the Taliban know of his whereabouts. 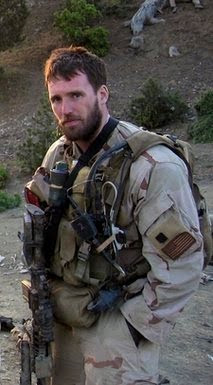 Lt. Michael P. Murphy died 6 years ago during a firefight in Afghanistan, acting in a way to protect and call aid to his fellow Navy SEALS. You can read the full account here. I mention this today because Lt. Murphy resurfaces in the news from time to time as various places are being named in his honor; most recently a warship has been christened with his name. I also call attention to this man, whose honor and sacrifice may well represent hundreds if not thousands of US and Allied service men and women who serve to put down our enemy, because of the backlash and seemingly incomprehensible opinion on what warfare means to the Christian believer.

Some Christians say, “Rejoice! Osama bin Laden is dead!” others say, “How can you celebrate someone’s death? Jesus said to pray for our enemies, not kill them.” Still others will say, “Be glad for the riddance of evil, but don’t celebrate.” Where is the middle way? Where is wisdom? I want to know.

Are we not born into warfare? Do we struggle against powers unseen? Do we seek the high road, striving to put down our passions such as anger, lust and greed? In so doing, are we to remove ourself from the world around us? Christ said to love our enemies, yes, to pray for them. Does this fact negate the way God delivered the Israelites from the Egyptians? Is this a contrast to the reality of the Red Sea devouring the enemy of God’s people? It cannot be, because God is unchanging; He knows we will always be engaged in conflict on this earth, both spiritual and temporal.

I have encountered Christians who are pacifists, have had in-depth conversations with them and, although this is not my belief, I respect their view. How can I not, given Jesus’ example with Pontius Pilate as well as many Christian martyrs, both ancient and modern, who willingly turned themselves over to their enemies. One Orthodox man I spoke with told me that even though an intruder would break into his home and threaten his life, he would not resist --that was his utter commitment to non-violence and loving his enemy.

Where would we be if Christians everywhere had this approach and understanding? There would never have been a Christian nation on earth, no one to spread the Gospel because the enemy would always prevail. How can we pray and ask God to “deliver us from evil” and then do nothing to work with God in this? It would be the same to pray, “God, please help those orphans down the street” and then do nothing to clothe, feed and protect them.

Orthodox believers adhere to the theology of theosis, that is, that we work in cooperation with God, we struggle (podvig in Russian) in order to be more like Christ. We struggle against our flesh, we struggle against unseen powers of the air and we struggle against those who are wicked. It is only because of that temporal struggle against the wicked that comfy Christians in free nations can sip coffee and ponder about whether we should celebrate or curse the death of the #1 terrorist in the world. Meanwhile, persecuted Christians in places like Mauritania, Yemen and Nigeria pray and wait with hope that someone would be given the strength and courage to deliver them from executions, burnings and public humiliations of all sorts...

It makes me ashamed that Christian people who claim a love of life and freedom could ever doubt the necessity of war and putting down the enemy. Elisha never doubted it, neither did David or Joshua ...or Jael or Deborah, whom the Lord God led into battle.

"When Israel came forth from Egypt, the House of Jacob, from a barbarious people, through the prayers of the Theotokos, O Saviour, save us. Judah became a sanctuary..."

Baptist and Forerunner, the Chanters of St. Lawrence.

There are no sanctuaries without sacrifice.

God, I pray you would bless and protect those who fight for freedom everywhere.

Hey sis, I thought you might find this article interesting:
http://en.wikipedia.org/wiki/But_to_bring_a_sword

Yes, thanks for bringing that article and scripture to light:

A variety of exegeses on this one, certainly. I don't think Christ was advocating violence here, as in, take up your sword and fight --but rather an acknowledgement that the world is under the dominion of satan thus, making His life & ministry a sharp dividing line between good & evil. He knows we are engaged in warfare all the time.

It was especially interesting to note that the Book of Kells translates the Latin "gaudium" meaning "joy" rather than "gladium" meaning "sword".

Thanks for sharing that -