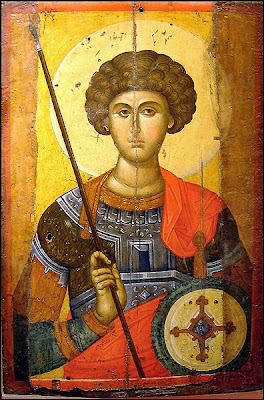 We celebrated this great saint and martyr today, the patron of our parish. St. George is known & honored in many nations outside the USA including Egypt, the British Isles, Georgia, Russia, Sweden, Serbia, Romania, Greece, Lebanon, Canada, and Portugal to name a few. I found it interesting to learn that St. George is also venerated in Islam, even though their writings about his life differ from Christian accounts.

St. George lived in the 3rd century and was a Christian Roman soldier under Emperor Diocletian. George’s courage and bravery in battle was noted and he swiftly ascended military ranks, becoming a member of the personal guard surrounding the Emperor. When Diocletian issued an edict to destroy the Christians of his empire, reportedly, George refused to participate and confessed to worshipping Jesus Christ. This enraged the Emperor, who then considered George to be a traitor deserving of execution.
After days of enduring tortures, George would not renounce his faith and as a consequence, many witnesses were converted to Christ. Among those converts was Empress Alexandra, Diocletian’s wife. She is said to have pleaded for George’s life, although unsuccessfully, and died a martyrs death. George was beheaded after days of torture.

His body was returned to Lydda, in Palestine for burial and he was soon honored as a Christian martyr. Today, St. George’s tomb and sarcophagus is located in the Church of Saint George, Lod, Israel.

We sing this troparion (a short hymn) to St. George each Sunday:

As the deliverer of captives and defender of the poor, healer of the infirm and champion of kings, victorious great martyr George intercede with Christ our God for our souls salvation.

St. George is often depicted in later icons on a white horse (such as the icon above, 17th century Greek and at left in my banner, 15th century Russian) with spear or sword in hand and a dragon underfoot. This image is born of a legend in which details vary according to locale. Most Christians view the legend as symbolic, depicting the on-going battle between good & evil.

Today, after Divine Liturgy, a luncheon was held and the children’s choir performed several pieces relating to St. George and the praise of our Lord Jesus Christ. We listened to a few speakers & enjoyed a delicious meal of kibbe without the wheat (cannot remember what the Lebanese term is), rice, potatoes, peas & fattoush; an excellent morning and afternoon. 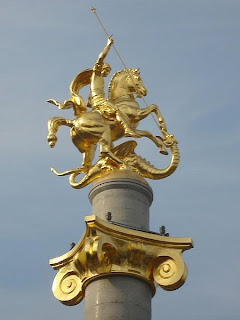 May we always remember the sacrifices of the saints;

their example points us toward